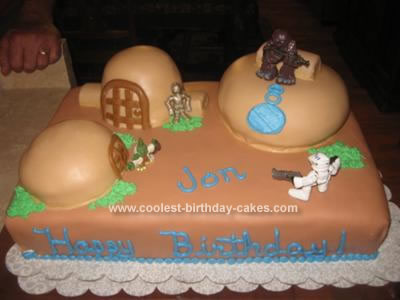 My Grandson Jon wanted a Star Wars Village Birthday Cake for his 8th birthday party. I tried researching some stills from the Star Wars Movies not wanting to watch all 6 of the movies. I finally found a town scene that depicted the dome shaped houses that were all in tans and browns and decided on a more simplistic approach.

I bought some figurines to put in the town after I realized how hard it was going to be to create them from fondant or gum paste. It is a two layer 14X18 sheet with homemade vanilla bean cake filled and crumbcoated with Italian buttercream, then covered with marshmallow fondant that I made at home.

People kept asking me what bakery I got it from! They said the fondant was pleasant tasting enough (I have never really tasted a great fondant but I am still looking) and everyone really loved the Italian Butter Cream. All the little boys were really impressed with Jon’s birthday cake too.