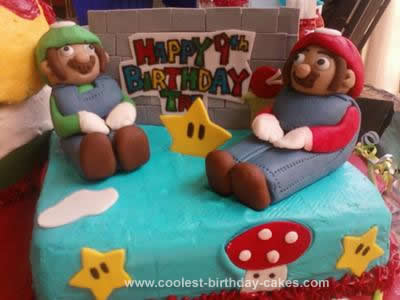 This is the Super Mario Bros cake that I made for my son’s 9th birthday in April. It is 2 separate pieces. The Mushroom is a yellow butter cake batter and baked in a Big Top Cupcake 2-part silicon pan. I separated the yellow cake batter and food colored red, blue, and green in order to get a Mario Tye Dye look when I cut into the cake.

To get the color swirl or Tye dye effect, I poured red colored batter into the top part of the Big Top cupcake silicon pan filling 1/2 full. Then I filled it the rest of the way with blue batter, so the cap of the mushroom appears swirled/Tye dyed with Mario’s colors when cut into. I did the same thing but with Luigi’s colors in the bottom of the pan. When it bakes the colors will blend together giving it the swirl effect.

When it is cool you then assemble the 2 parts and frost. I find that it works best to let it cool over night. The square is also a yellow butter cake. After a night of cooling in the fridge, I decorated them starting with the mushroom first. I used my French vanilla butter cream frosting starting with the mushroom stem completely doing it in white. Making sure to put it a little heavier on the top to help keep the cap in place when I assemble it.

Next I put on the cap and decorated it with yellow colored frosting. I put it in the fridge again to let the butter cream stiffen up a little, and while it was in the fridge I decorated the smaller square with the blue colored frosting. Now I will switch out the cakes and began with a soft cloth or paper towel to smooth the frosting (gives it a fondant look). Then I started to put on the fondant Super Mario Bros decorations. Repeat with the square.

The cake was a huge hit at his party! 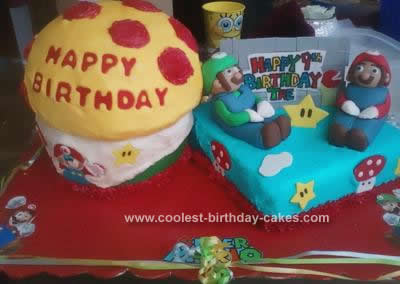 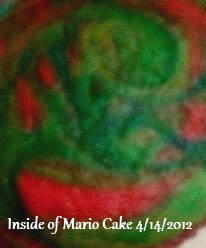 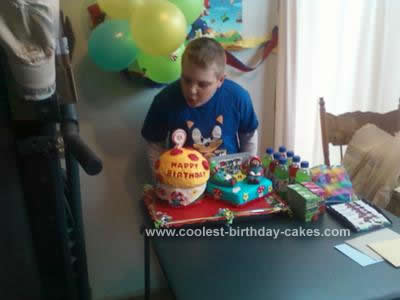