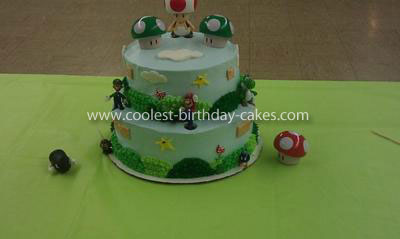 My daughter was turning sweet 16, and wanted a Super Mario Bros. Birthday Cake. I searched online and found one that I liked, but I didn’t like the huge mushroom cake they had on top of theirs. I decided to use Super Mario Bros. figurines on top of mine.

I used 2 10″ cakes and 2 8″ cakes. I made the stars, flower things, flower pots, clouds and bricks out of fondant. The bricks were the hardest to make because I had to make straight lines! Here’s a tip: when coloring fondant, wear GLOVES! LOL This is the 3rd cake I’ve made, and have learned the hard way that food coloring dyes your hands too! Also to make the “eyes” of the star, I just dipped the end of a toothpick in black food coloring and just dabbed them on.

I placed the fondant pieces on. Then I used baggies with a corner cut off and outlined the hills in 3 different shades of green, then used a #21 star tip, and using the same 3 shades of green, filled in the areas. Then I stacked the cakes together and repeated the same process.

Finally I placed the figurines on!! When I stacked the cakes, I did mess up some of the top layer’s frosting, but was able to fix it. To save frustration, I would buy the round cakes already frosted! LOL But you can certainly make your own! I just completed making another Super Mario Bros. cake for a friend’s little boy..HE LOVED his too! 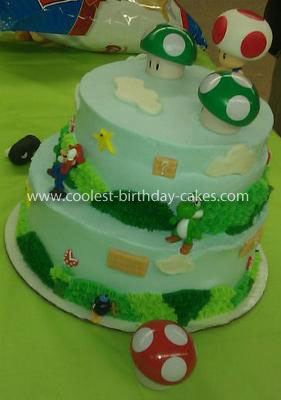 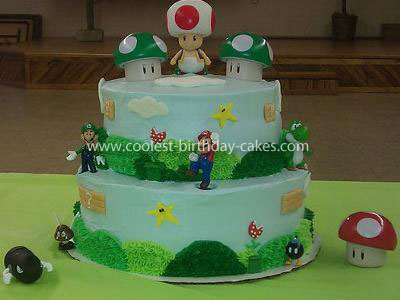 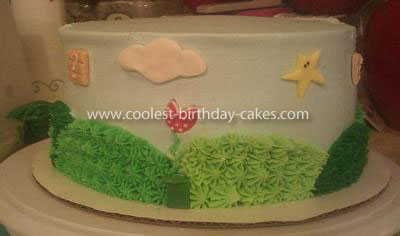