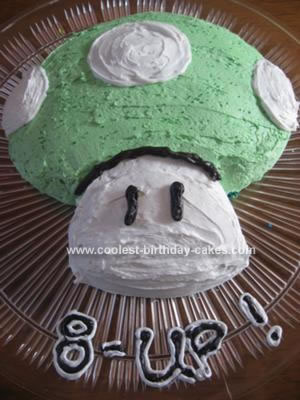 My son is turning eight today and LOVES Super Mario Brothers and LOVES the color green. So I thought what better to do than a green one up mushroom!

I first baked a cake in a 13″ round pan. After the cake cooled, I cut the circle into a mushroom by cutting the bottom half of the cake in almost a triangular shape. I frosted the bottom with white icing and then the top with green icing (both buttercream). After that was finished, I piped white frosting into circles and filled them in. I did the mushrooms little eyes with black dyed icing.

This Super Mario Brothers One Up Mushroom Cake turned out BEAUTIFULLY and goes great with his Mario decorations! I am so excited for my son to see it!

I also made these cupcakes for my son’s class for his 8th birthday and they were a HUGE HIT! All the kids started talking about Mario and my son was so proud!

First I made 24 cupcakes and let them cool before I began frosting them. After they cooled, I frosted 12 of them with red frosting and the other 12 with green frosting (both buttercream). I then piped three or four circles of white frosting on the top for the spots. I finished by removing the cupcake tin and piping eyes on each cupcake’s side.

The turned out so cute and the best part was his smile that brightened my day! 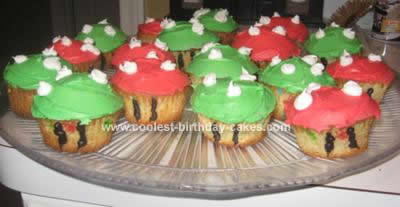 1 thought on “Coolest Super Mario Brothers One Up Mushroom Cake”