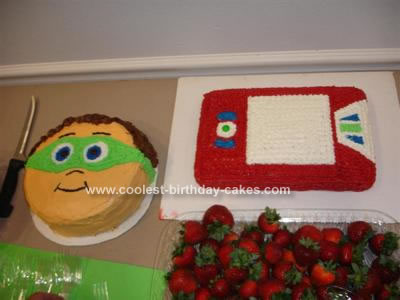 My husband and I made these cakes for our son’s 4th birthday! The first was a Super Why!cake. We used a 10 inch round pan to create this cake. We started with the skin colored frosting and made it as smooth as we could all over the cake. We then used a toothpick to draw in the mask and eyes so we would have a guide to go by. We used a star tip and green frosting to create the mask, then made the eyes and finished with the white part so we would bleed colors.

To finish his eyes we put brown M&M’s for the pupil. To create his eyebrows, nose and mouth we used thin black licorice. To finish we added his brown hair. We used store bought-I think Pillsbury, frosting in a can with tips that come with it. We just covered the top with “hair”. This frosting did slide down the cake a little so we just took the can with us and added more hair at the party and no one knew!!

His second cake was the Super Duper Computer! This cake was actually pretty easy We just bakes a cake mix in a rectangle pan. Then we frosted the whole cake with a thin layer of white frosting and let it harden so the icing would stick easier. We then used a toothpick to draw the screen and buttons. We used a star tip to create the computer. We did use an M&M for the round button. You could put anything on the screen We out a number 4 candle laying down. I couldn’t find a good picture with the candle!

**The red frosting was hard to get red. We tried lots of gels and drops but only got pink. so we went to a cake supply store and bought a red powder–and red it was!! The longer it sat the more red it got.

5 thoughts on “Coolest Super Why! Cake”