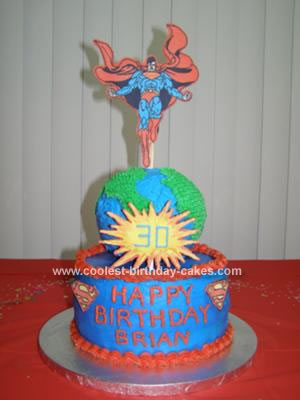 I made this Superman cake for my husband’s best friend’s 30th birthday. The bottom is two 8-inch layers of black forest cake (chocolate cake with cherries and whipped cream as the filling) and the “Earth” is chocolate cake baked in the Wilton sports ball pan.

Several days in advance I made Superman using the royal icing transfer method. This is useful if you want your character to be upright. I chose an image from a printable coloring book site and placed it under wax paper. Be sure to flip your image before printing if necessary or letters and numbers will be backwards.

I iced the bottom cake in royal blue buttercream with a red border and writing. The Superman symbols were attached with buttercream.

I glued the two halves of the ball cake together with buttercream and placed it on the bottom cake. I pushed 3 wooden dowel rods through both cakes to secure them. I iced the ball cake in royal blue and traced the continents in with a toothpick (pattern found on Wilton website under Pattern Locator) and filled it in with green buttercream and a star tip. The last step was the placement of Superman and the 30 sign.