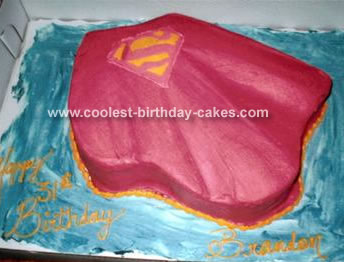 I made this Superman cape cake for my friend’s 31st birthday. He is a big Superman (Smallville) fan and never misses an episode.

For this cake I used 4 cake mixes and made 2 half sheet layers. Instead of using the suggested additives on the box I used 3 eggs, 1 cup sour cream, and half a cup of oil per box of mix. The sour cream helps to give the cake a better texture but doesn’t affect the flavor of the cake. After I let the layers cool I wrapped them in saran wrap and chilled them overnight.

The next day I took them out and spread a small amount of buttercreme icing on my cake board and positioned my first layer. Then I iced the top of that layer with buttercreme icng as well and placed the second layer on. After I had gotten the layers together I used an icing bag with an open coupler and filled in the gaps around the edges.

After the layers were together I used a serrated bread knife to carve the shape and the grooves on the top. **Tip, start shallow, you can always carve more if needed.* Then I iced the cake in red buttercreme icing and smoothed. Next I let it sit for about 10 minutes or until the icing was not sticky at the touch and I used a regular paper towel to give it a smoother look and the dot pattern on the towel also gave the icing that rubbery look like the actual cape in the most recent movie. Then I spread white icing on the board and sparatically dotted blue coloring around and used a spatula to smear it in and create the blue sky. You can smear very little and it will leave a little white so that it looks like clouds or smear the color in well.

For the emblem I Googled “superman” and found a logo. I printed it out in reverse, taped it to a board then taped a piece of wax paper over it and traced it and filled it in. I put in in the freezer for about 10-15 minutes. When it had firmed but not frozen solid I flipped it over and positioned it where I wanted it on the cake. When doing a transfer like this gently rub the wax paper after placing image on cake to warm the icing a little and then slowly peel the wax paper off.