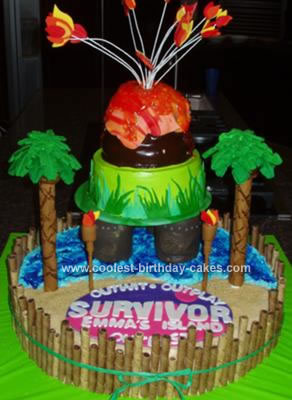 This Survivor Birthday Cake was fairly simple to assemble the day of the party, but I spent a lot of time on prep work the days prior.

Fondant: The palm trees, survivor logo, torches, volcano flames, grass, and upper tier cake plate were all crafted with fondant. The palm trees were made from pillar tubes (used for tier cakes). I covered all but the lower 3 inches in brown fondant and then painted x’s with brown food coloring. I also scored them with a fondant cutter before painting. The leaves were made with snowflake cookie cutters.

The first set of leaves I placed in a bowl and then pressed the trunk into the center. I left them to dry upside down in the bowls for 2 days. Once I put them onto the cake, I added 3 more layers of leaves using smaller snowflake cutters (also air dried for a couple of days).

The torches were made with fondant wrapped around white lollipop sticks. The volcano flames were made from a leaf shaped fondant cutter and stuck on wrapped floral wire. When I put them in the cake, I put all of the wire into a flower vial spike. (again, made ahead of time and air dried)

Extra touches: The ocean and lava had colored piping gel. The sand was sugar in the raw. The pilings around the outside of the bottom layer were round cookies. The top layer is sitting on 4 dice cups from “Pirate’s Dice”.

The one thing I would do differently is the volcano. I would cover the whole thing in brown fondant and then use the piping gel for lava. The chocolate frosting was too dark and it melted and oozed a bit.