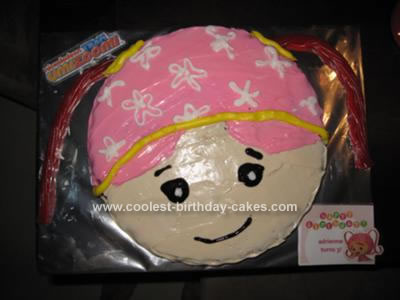 My daughter was turning 3 and was asking for a Team Umizoomi cake for her birthday (which is her new favorite cartoon as she gets to see it before she goes to school). I asked her which character from the show was her favorite and she chose Milli.

I started this Team Umizoomi Milli Cake by baking a chocolate fudge cake (using a cake mix) but I substituted buttermilk in place of the water and I added an additional egg. I poured the batter into the only round baking pan i had which was actually a pie pan! I was going to make Milli’s face/head.

I used a can of vanilla frosting and coloured half of it pink and the other half flesh (by putting a tiny bit of brown food coloring). I also had yellow icing in a squeeze tube and white and black cake decorating gel tubes.

I coloured Milli’s helmet and hair pink, and her face flesh. Then I drew in the outlines of her helmet using the yellow icing tube. Next step was to draw her eyes and mouth with the black gel pen. Then I made the flowers on the helmet and squeezed a dot on her eyes using the white gel pen.

Last step was to stick in Twizzlers red licorice ropes for her pigtails!