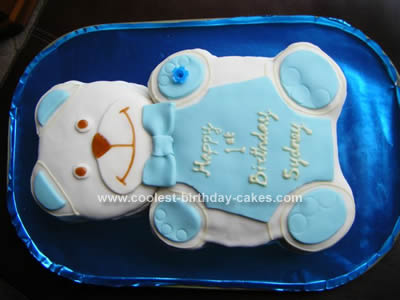 Our little grandson Sydney was born in Germany very prematurely, and whilst in hospital for several weeks we called him our ‘brave little bear’. Although still small, as his first birthday was approaching, it seemed appropriate to make him a Teddy Bear birthday cake. I ‘googled’ the internet for inspiring pictures, and having admired some, adapted the ideas to make my task as simple as possible.

I baked two plain Victoria sponge cakes, one using 6inch (15 cm) tins and another using 7inch (18cm) tins, and also a Swiss roll, then filled these cakes with jam and butter cream. From the small cake, I shaped the bear’s head, carefully forming the ears. I left the large cake intact, apart from cutting away a small curved shape where the head was to be attached. The Swiss roll was then cut into lengths matching the height of the cakes, and attached to the cake with butter cream to form the paws.

Using one kg purchased, Ivory, Ready to Roll icing; (reserving a piece of this to, later, colour blue), I covered the head and the body separately for ease of handling, and then joined them together. I next coloured the reserved icing, and using various wine glasses, cut out shapes for paws and ears. I made a paper pattern for the bear’s front,and cut round it to get a neat shape. With the remaining ivory icing, I formed two very long sausage shapes, placing them around the entire base of the bear to seal it, neatening this by pressing a pattern into it.

Next, details such as facial features and the greeting were added, using purchased toffee and vanilla flavoured writing icing, and finally a shaped bow tie was placed to hide the join between the two cakes. 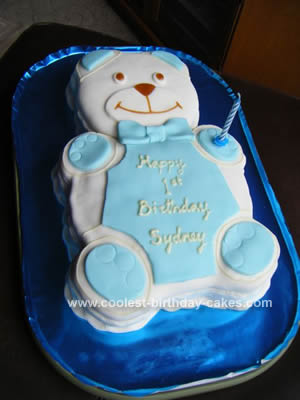