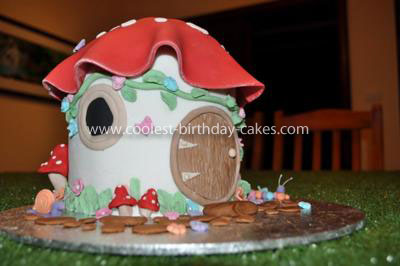 This Toadstool House Cake is the cake a made for my daughter’s 5th birthday. The inspiration for this cake came from some cakes I found on the internet. This is the first time I have used fondant and was surprised by how easy it can be (albeit a little time consuming) but I found this cake was fun to make.

To start with I baked two 15cm round cakes (mine were chocolate mud cake). I cut each in half to make 4 discs and sandwiched them together with chocolate ganache. I put the cake on a setup board the same size (15cm) which makes it easier to apply the ganache on the outside as it acts as a guide. I used a ganache tool/scrapper to smooth the sides and make the cake the same size are the setup board. I then applied ganache on the top of the cake. After this I hot knifed the ganache to get that really smooth glossy look.

Measure the height and circumference of the cake and roll out your white fondant icing to at least those measurements and until it’s about 3mm thick. I measured and cut the fondant icing so that I could wrap it around the cake and join it up (put the seam at the back if you can’t get it looking really smooth). At this point you don’t need icing on top as you will create a red cap for it so I just folded the excess icing over the top edge.

To make the domed top, I actually layered marshmallows on top of the cake as I hadn’t really thought this part through! My husband suggested lollies but I thought that might be a bit lumpy. I rolled out a circle of red fondant icing and draped it over the top of the cake (and marshmallows). I found that using liquid food colouring was difficult to get a deep colour so ended up using a paste instead to colour the icing red. You can carefully trim the edges of the red cap of the toadstool to the right size using kitchen scissors after it is in place.

Now for the fun part! I then started to decorate the little house with white fondant spots on the roof, fondant flowers, butterflies, green vines and leaves, baby toadstools, a snail, a caterpillar, marbled fondant stones, the door and window.

I found by trial and error that it’s best to make and apply the decorations on the same day. At first I made some in advance and thought I’d let them set overnight but then found it really difficult to get them to mould to the shape of the house (especially the door which dried flat and then had to be put on a curved cake!). So I found the best method was making the flowers and leaves and putting them straight on the cake with sugar gum paste. The quickest and easiest way to make flowers, leaves and butterflies is to use a silicone mould which I bought off the internet. 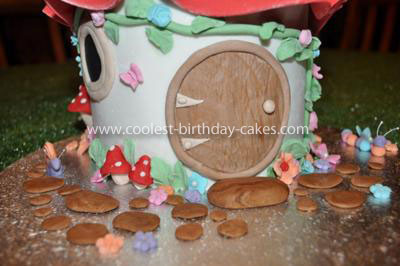 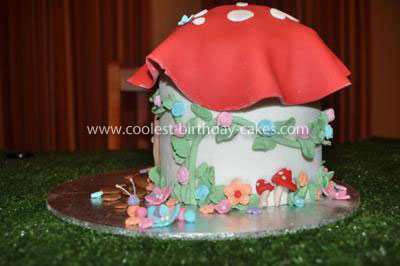 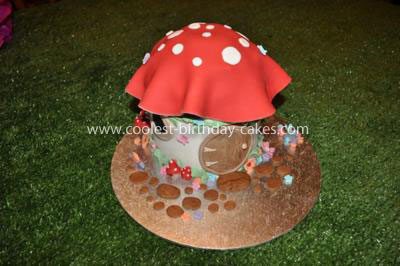