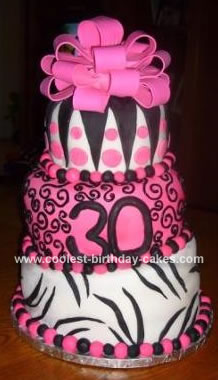 I got the general idea for this Topsy Turvey cake from various site such as www.pinkcakebox.com. This was actually for my own 30th birthday party. I loved the idea, and my husband priced out having a bakery make it, but it was going to be very expensive, so I decided to take it on myself.

After the cakes were baked and iced with buttercream, I used store bought rolled fondant to cover each cake. I then made chocolate fondant by adding melted candy melts to the store bought fondant and added black gel coloring to get black fondant. To make the zebra stripes, I rolled the fondant to approximately 1/8″ thick and used an exacto knife to free hand the stripes. I rolled out long strips of fondant to make the “30” and allowed it to dry flat overnight.

I cut various size triangles and drops to decorate the top layer. I then rolled small balls of pink and black fondant to make the border. I used black buttercream to create the swirls on the middle layer. The bow was a store bought, paper clay bow. I followed package instructions to dye it pink. I mixed pink icing coloring with water and dipped the bow into the water until the desired color was achieved, allowing it to dry 30-45 minutes between dips.

Once dry, I used buttercream to secure the bow to the top of the cake.