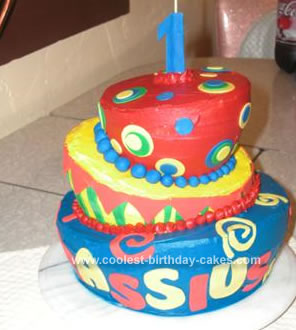 I got the idea for this Topsy Turvy birthday cake from this web sight, but if you’re not in it for the long haul don’t try this type of cake. I also Googled “Topsy Turvy cake instructions” and read up to decide which method would work for me. Three days before the party I started by making all of the accents out of fondant. The swirls I cut out by hand which made them a little crooked so it fit well with the cake, but it was a lot of work. The polka dots are just three different size circles stack on top of each other off centered. The stripes were all different sizes and a little wider at the top. The letters for the name and the #1 on top I printed from my computer and then cut them out and laid them on top of my fondant and cut around them with a knife. I then stored them in a Tupperware between layers of wax paper to cut them pliable. Two days before the party I made all the cake. The bottom layer is two 10” circles. The second is two 8” and the third is two 6”. All together it took 4 boxes of cake mix. After they cooled I iced between them and stacked them. (I actually stacked mine with the bottoms together in the middle. They seemed to sit a little better that way, but I did have to trim a little to get a flat base.) I then cut the top at a diagonal to give it the crooked look, and the lower cake at a diagonal inward to make it smaller on the bottom than the top. I did this for each layer. I then put a crumb coat on all three layers, and put them in the fridge to chill over night. The day of the party I assembled my cake by cutting an off centered hole in the top of the bottom two layers of my cake. The hole needs to be big enough to stick the next layer of cake in it. (I had done some approximate measuring before I iced them the night before, so I made templates to cut out my holes with.) This gave me a flat surface to stick the next layer on. Then I just stuck them in the holes. I iced everything (this would have looked much cleaner covered in fondant, but there is no comparison to butter cream icing for taste) and added my fondant accents. I did a little piping around the base of each layer to cover my mistakes. I read a tip to make the trim around the base bigger on the small side of the cake because it adds to the illusion of it being off balance. Anyways, I thought it turned out pretty good for a first attempt. And it got a lot of complements. 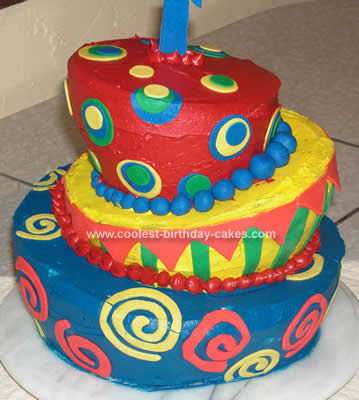 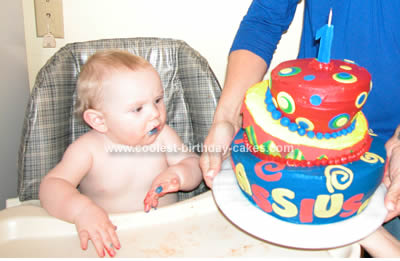