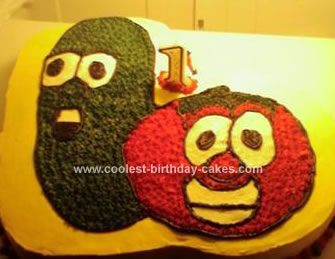 I made one round cake out of white cake that I added a little vanilla pudding to when I mixed it for this Veggie Tales birthday cake. The other side is a 9×13″ cake made of chocolate that I also added pudding to the mix.

I just measured along the right bottom side of the 9×13″ and cut out a half moon shape so that I could wedge the round cake into it. I crumb coated them after drizzling a simple syrup onto them for extra moisture and then refrigerated overnight.

For the frosting I used 6 cups of homemade butter-cream to which I flavored with a little vanilla and almond extract. I separated about 1/4 cup for the black outlining, 1/4 cup for the white eyes and mouths and then cut the remainder into thirds for the yellow, green and red.

I first put the yellow frosting on the outside and smoothed it with a my small spatula, I dipped it into hot water with each pass to make sure it was smooth. I used a #3 tip for the piping of the black outlines and also to fill in the white areas of the eyes and teeth. I dipped my finger tip into cornstarch to flatten out the teeth and eyes and then piped on the eyes in black with which I also flattened with my finger.

I used a #16 star tip to do the rest of Bob and Larry. I then used the leftover frosting to make a shell border with black dots. The facial expressions turned out silly, I meant for Larry to smile more but I was so tired after staying up too late and did not do as good of a job as I had hoped. It still turned out cute and my nephew loved it!