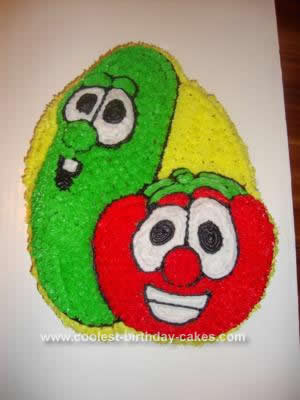 I made this Veggie Tales Birthday Cake for my son’s 4th birthday party, he loves Veggie Tales, especially Bob & Larry! I borrowed the Wilton’s Veggie Tales cake pan, greasing it with Wilton’s Cake Release and made the cake using one box of Pillsbury Confetti Cake mix. I let it bake in accordance to the pan instructions which ended up being for about 25-30mins. I checked it periodically to make sure it didn’t overcook!

I was very happy with the end result! The cake was a lot easier to make then I thought it would be and my son absolutely loved it!