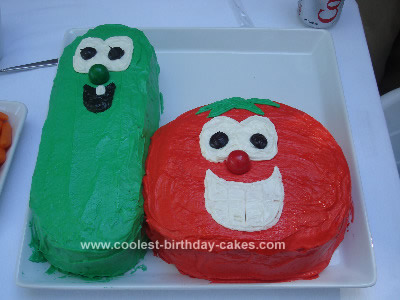 My two-year-old son is a Veggie Tales fanatic, so a VT party was the perfect theme for his second birthday. Before baking the cakes, I traced the pans I was using onto parchment paper to create a template.

Then I used that shape to draw out the shape that I wanted Bob and Larry to be and I drew their faces onto the template. To make Larry the Cucumber I used my favorite chocolate cake recipe and make a 9 X 13 cake. Once it cooled and cut it in half long ways and stacked the two halves with some canned chocolate icing between the layers.

To make Bob the Tomato, I made that same chocolate cake recipe again and baked it in to round cake pans that I later stacked and put canned chocolate icing between. Once the cakes had cooled I placed my pre-made templates over them and cut them into the right shape. I used Wilton Kelly Green, No-taste Red and Red-Red food colorings, with a little bit a black food coloring mixed in the canned chocolate icing for the eyes and Larry’s mouth. Both noses are gumballs that I bought at a local Walgreens.

I cut out the eyes and mouths that I had drawn onto the parchment template and place them onto the frosted cakes to make sure the facial features were the right dimensions for the size of the cake.

I actually used this website as a reference and got some great ideas for a Veggie Tales Birthday Cake from looking at the cakes others had made.