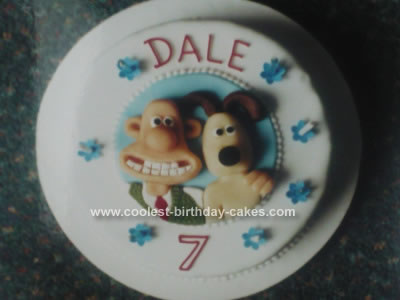 I made this homemade Wallace and Gromit cake for my son on his 7th birthday. After covering the sponge cake with white sugar paste, I coloured another piece pale blue for the plaque in the centre. I rolled this piece out and cut into a circle which I stuck on to the top of the cake.

I used a photo of Wallace and Gromit as reference and coloured some pieces of sugar paste to match. I wanted to create a 3D effect, so I shaped the characters to make them look as though they were coming out of the cake.

I moulded the separate body parts and assembled them using water and a small paint brush, placing them directly on to the plaque.

To finish off the cake, I piped dots around the edge of the plaque and the bottom edge of the cake. After positioning the seven candles and piping the lettering, my homemade Wallace and Gromit cake was ready for the party!