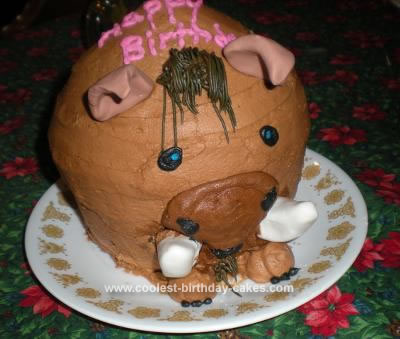 I received the Big Top Cupcake set for Christmas, and my 27, soon to turn 28 year old zoo keeper sister exclaimed “I want a warthog cake for my birthday!” when she saw the pig idea on the side of the box.

I prepared the Big Top Cupcake according to instructions and filled it with instant banana pudding. I made my basic butter cream icing from the Wilton Website, but I always use water instead of milk, don’t like the idea of it spoiling from not being in the fridge.

I made the ears and tusks from fondant with gum paste powder added so they would harden up and hold their shape better. They were shaped around toothpicks so when I was ready to attach them I could just stick them in.

I frosted the body with brown and then added thicker icing to bring out his nose area by taking the tip off my piping bag and just squeezing icing through the coupler. You have to have a coupler with a solid circle though, one particular popular brand has a slit in their couplers so that will not even squeeze icing out! I used that to make the feet as well.

I stuck in the tusks and ears after they had dried for about 3 hours in a warm room. I then added the eyes, mouth and nostrils with black. The hair was made with the grass tip.

Got lots of compliments on the cake and my sister loved it. I thought it kind of looks more like a Bison though.