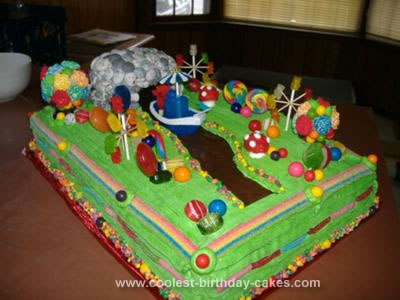 I was asked by friends on very short notice to come up with some sort of Willy Wonka cake for their son’s Willy Wonka themed 6th birthday party. I settled on the idea of a likeness from the ” pure imagination” scene from the original Willy Wonka movie.

For the base cake I used the biggest sheet cake pan I could find and baked 2 layers of vanilla cake, filling it with Bavarian chocolate filling between the layers. For the cave I used the deep side of the Wilton giant cupcake pan and used chocolate cake so that when I hollowed out the cave entrance it would be dark inside. The stones covering the cave are edible chocolate pebbles which I found online.

For the chocolate river I used instant chocolate pudding. I found the boat at the grocery store and modified it with a parasol and paddle trying to make it look at least similar to the Wonkatania. Most of the candy is pretty easy to come by and pretty self explanatory. For the tree trunks I used large pretzel rods and dipped them in chocolate and inserted them into a Styrofoam orb that I found in the arts and crafts section at my local Dollar store. Once inserted I used a hot glue gun to place several gobstoppers at the base of the orb then glued the flowers on.

The flowers I used were royal icing carnations which I bought in white and used food coloring to dye them. It was a pretty fun cake to make.