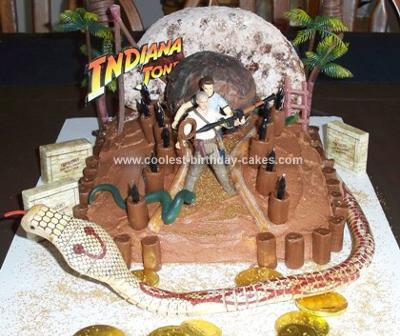 My 11 year old grandson requested an Indiana Jones cake. I spent a few weeks thinking how to do it and gathering the props.

The cake is a box chocolate mix that I baked in a 9 x 13 pan. The icing was a homemade buttercream icing that was tinted brown. This cake was so much fun to put together!

Cave: 1/2 of a store bought (thrift bread store) angel food cake. Lightly sprayed with butter and patted a mixture of powdered sugar and cocoa to make it look like a stone cave. Secure cave with icing and toothpicks inserted at angles.

Rock: Crumpled tissue paper inside; outside was a brown Kraft paper bag from a dollar store, dampened, cut a circle, and covered tissue ball. Place in front of cave. I made this the day before.

Tiki torches: Lining the path were Tootsie midgets hollowed out with the point of scissors to insert black birthday candles. Small dab of icing on extra midgets which were placed to outline the cake.

Path Outline: Cow tales candy cut in half, shaped into path with cut side down. Sprinkle path with gold sugar purchased from cake decorating store. Could use brown sugar as an alternative.

Figurines – small Indiana Jones and Mutt placed in front of the rock. Used the snake on the path and the small top secret boxes that came with the figure.

Indiana Jones sign – carefully cut from the box of one of the figures. Created a stand for it from two wooden sticks left from the wood spirals and taped the sign on the back. Any type of sticks will do – including Popsicle craft sticks

Placed on a board with gold chocolate “coins” scattered and a wooden flexible snake from a local drugstore ($2.00). Plastic snake would work fine also.

The cake was very impressive when the candles were lit – a huge success in my grandson’s eyes.