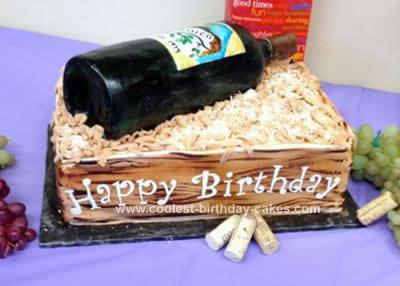 My daughter asked me on a Wednesday to make a wine bottle in a wooden box cake for a co-worker and needed it Friday morning. Well, needless to say I was a little worried as there would be about 70 people that would see it. She showed me what she wanted and then Thursday afternoon I started on the cake.

The base of the cake was a white cake with strawberry filling. So far it seemed easy. Then came the bottle. I had a real wine bottle I used as a template. Made a fondant lable that I painted with the girls name and vintage year. I had some 4 inch round cake pans and made 4 small cakes, filled them with buttercream to keep it together then stuck a dowel in it to keep it straight.

I cut a flat back out and laid it down on a board. Then covered it in a light coat of buttercream and then fondant. I made the neck of the wine bottle out of fondant and made a gum paste wrap to look like a real bottle top. I sprayed the bottle with green and black, added the cap and hand painted the gumpaste label. I supported the bottle on the cake by using straws instead of dowels.

I made some marshmellow fondant for the sides of the box. Painted the sides and sprayed a lighter color over to gve it a woodlike appearence. I used buttercream to make the straw in the box (some thought it was spaghetti but that’s okay) and white chocolate shavings to look like sawdust.

It was a hit. Some people thought the bottle was real at first glance and others thought I just put a label on a real bottle. So many compliments and had people ask if I had a shop. WOW!! I have never been so excited about any cake I have ever done. People also said it was the moistest cake ever. Never underestimate yourself and anytime you get a chance to try something new, take it. The cake was done for free so really who would complain. HAHAHA 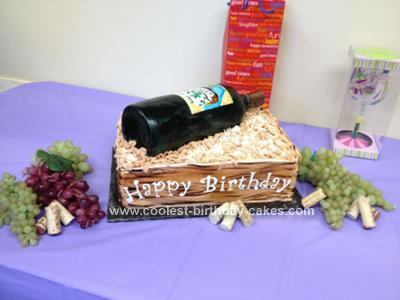