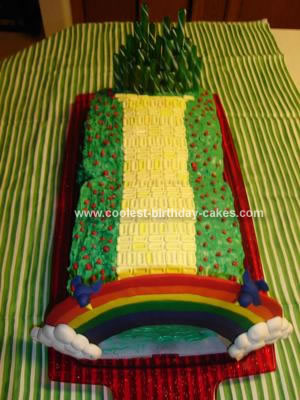 My daughter was obsessed with the Wizard of Oz movie so, for her fourth birthday this year, she chose this as her theme. I wanted to make her cake really special so I came to this site looking for ideas. This is what I came up with.

First of all, I used two boxes of Betty Crocker Confetti Cake Mix and prepared them according to the directions on the box. I used two 9″ sq cake pans for each box of cake mix. So I ended up with four square cakes after baking. I made two stacks of two cakes and then set them side by side to make an 18″ long cake. I took two 12 oz containers of Betty Crocker vanilla frosting and added green food coloring to it. I put the frosting between the cakes and all over the top and sides.

The Yellow Brick Road was made out of lemon PEZ, which I ordered from www.dreamlife90pez.com. I placed them down the middle of the cake in a pattern that I had created beforehand.

The Emerald City was made out of old-fashioned green apple candy sticks that I got from Cracker Barrel. I broke them into various-sized pieces and then dipped them in very warm water. This caused them to be sticky and they stuck together quite well. I made sure to make three longer pieces, which would stick into the cake and support it. When I was satisfied with its structure, I placed it on waxed paper and then put it in the fridge until I was ready to put it on the cake.

I used strawberry Nerds candy to make the poppies in the grass. The rainbow was made out of Sculpey and was the only non-edible part of the cake. My daughter has this hanging on her wall now in her room. I just happened to find a sparkly-red serving tray at the Party Outlet store that was on clearance from Christmas. I added the Emerald City about an hour before the party started.

This cake took me about 1.5 – 2 hours to make, once I had the Emerald City finished. I really didn’t want to cut into it after all the effort I had made! I hope this description is helpful to anyone interested in making a cake similar to this. I had a blast making it!