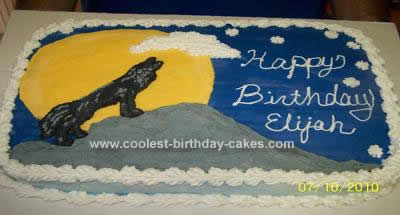 A friend wanted me to make a Wolf Birthday Cake for her little boy. I found a wolf coloring page on the internet. Traced the wolf and cut it out. Colored gumpaste with Wilton gel color, and then laid the tracing on top of the gumpaste and cut around it with a sharp knife. Molded the wolf a little by hand to give it a more natural appearance. Used a toothpick to apply gray buttercream to make the hairs on the wolf.

Used Wilton’s buttercream recipe. Made the moon and rock out of buttercream also. Applied the wolf to the rock using some icing as “glue”. Turned out looking just like a wolf howling at the moon.