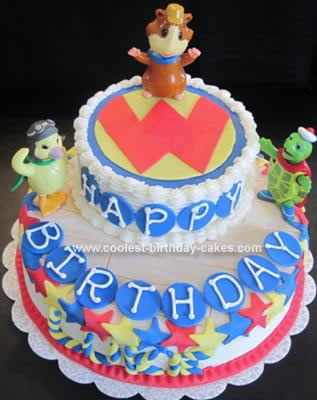 The bottom tier has a “hardwood” floor I made by marbling brown food coloring into marshmallow fondant and then cutting into strips. I cut out red, blue and yellow stars to trim the edge between the “floor” and the sides of the cake. The bottom border is just rolled fondant with indentations made in it.

The Happy Birthday is royal icing on fondant circles. Luke’s name is made with blue and yellow fondant twisted together and formed into letters.

The Wonder Pets logo on top of the 6″ cake was super simple because I just went to the Nick Jr. site and they had a perfectly sized pattern for it for making a cape out of felt! I just printed it out, cut it out, then used it as a template to cut the fondant.

The figures are from a store-bought fly boat toy I purchased for my son. A good tip is that the toys have a hole in the bottom for the peg they sit on on the toy – but it is exactly the same size as the Wilton lollipop sticks!! I just cut them shorter and they hold the toys on perfectly!