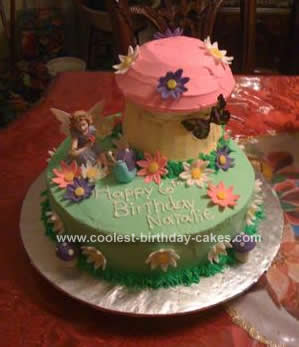 For this awesomely awesome Garden Fairy Birthday Cake, I started out with a 2 layer 12in. round cake base and I used the giant cupcake pan to make the mushroom. To make the mushroom you flip the cupcake bottom piece so the narrow end is on top and cut off the tip of the cupcake top to make it a dome shape.

The 12in. cake was French vanilla cake with a Bavarian cream filling and the mushroom was a chocolate cake with a chocolate ganache filling. I used buttercream to cover both cakes. And I used the Wilton cake icing tip for the first time on the bottom cake and it made such a difference!! I also used the grass tip to make the borders look like grass. I made the daisies, the snail, and the little mushrooms out of a fondant/gumpaste mixture. The fairy was not edible. I did have to use dowels under the mushroom because it was heavy and I didn’t want to risk having a sunken cake. And to make the delivery easier I used a extra long dowel that went through both the mushroom and the bottom cake.