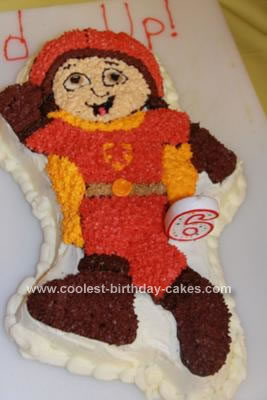 My daughter wanted a Word girl party for her sixth birthday. Word girl is from PBS and there is not much paraphernalia available, but we managed to make a Wordgirl Birthday Cake.

I used Wilton’s Go Diego Go pan to make the cake and made 2 batches of buttercream frosting for the decorations, which gave me more than enough. I also wrote “Word up! Happy Birthday!” on the cake board. This was relatively easy, just had to figure out the icing colors and amounts needed since there weren’t specific directions. I printed off the Diego directions just as a basic guide for the order to go in.

The eyes got smashed under the wrapping and had to be touched up. I am far from a professional decorator, but the kids were thrilled. We also had red and yellow star shaped sugar cookies. My other idea for a Word girl cake would have been a two layer round cake frosted in the red and yellow of Wordgirl’s star emblem.