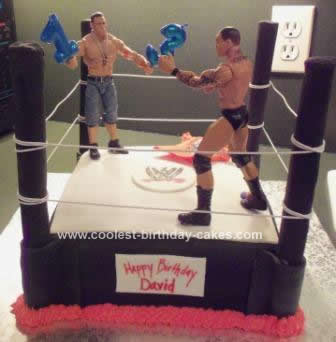 I made this Homemade WWE Birthday Cake for my son’s 13th birthday, it was a huge hit at the party! This was my second attempt to do a fondant cake, and I was very pleased. I used two nine inch square cake pans and 1 boxed cake mix. After applying my buttercream crumb coating I let the cake set for several hours in the refrigerator. I then applied black vanilla fondant over the entire cake.

I then measured the bottom of the square cake pan to cut my white vanilla fondant for the top of the ring. The poles are made out of large dowel rods that I cut and covered in black fondant. This can be done a day in advance so that your icing is hard and easy to handle.

After my cake was assembled, I hot glued (careful to not get any glue around the cake) the poles as close to the cake as possible in the corners. The ropes are white elastic rope. The white disks and signs are fondant and I used edible ink to write on them. I also make the WWE disks for the cupcakes (advice, do not put on the cupcakes until prior to serving or they will soften).

I trimmed the cake in colored buttercream icing. Also, I hot glued the candles into the WWE wrestlers hands, it peeled off easily after the party so the toy was not damaged. 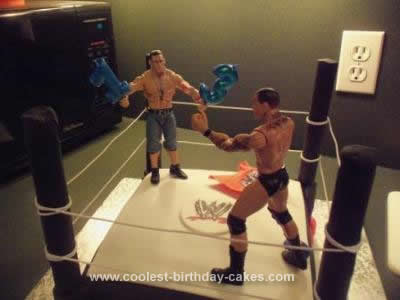 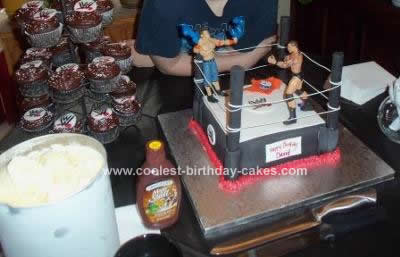 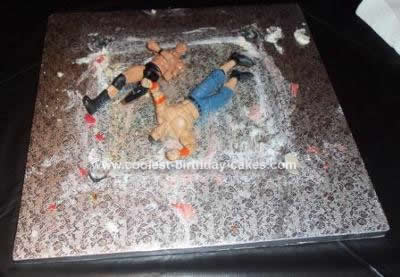