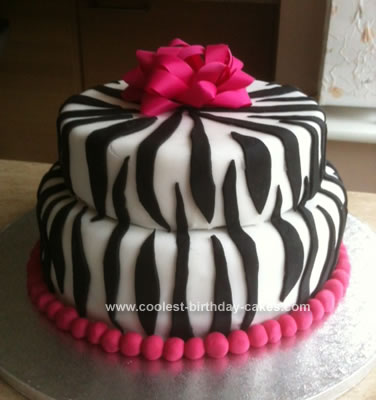 My daughter wanted something different and eye catching for her 18th birthday cake. She came up with the theme of pink and white for her other table decorations and loves zebra print so this cake seemed like the natural choice. I had never tried anything quite so adventurous as this so this really was a first!

The base consists of two cakes sandwiched together with butter cream. The secret is to get a nice clean edge to the cake so the fondant covering sits well on it. I used a good cake release spray and the top layer is actually the base of the cake which came out of the tin perfectly. The top layer is the same but a smaller tin and sits on a cardboard cake base with supports which are just plastic straw sized sticks to prevent the top cake sinking into the bottom one.

The icing was easier than it looked but did take quite a while. Cover both cakes separately, sit the smaller one on top as I have just described. Next roll out some black fondant icing and using a sharp kitchen or craft knife cut the stripes in various shapes and lengths and stick them on. I used a runny icing sugar glue. Just icing sugar powder and water. Be careful not to get it on the right side of the black icing though as it dries white!

The pink beads are just small amounts of pink fondant rolled in the hands. The secret here is getting them all the same size. If your top cake is much smaller than the base you can also put a layer of these around the join too. This will cover any imperfections where the cakes meet. I planned to but couldn’t as my cake tins didn’t differ in size enough to allow this.

The top is a fabric bow but next time I’d have a go at making an icing center piece. I’m happy with my first effort though! My daughter and everyone else thought it was great.