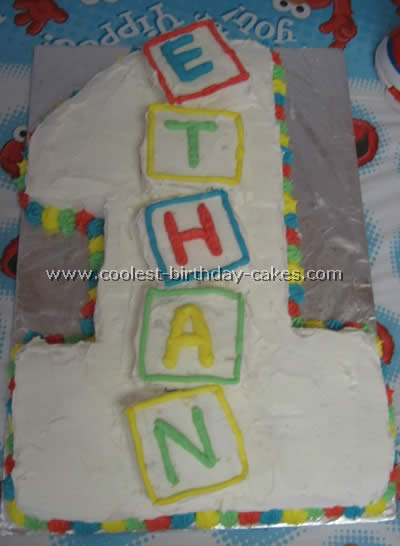 I made this creative cake for my son’s first birthday. I wasn’t sure if I could decorate well enough to make a theme cake so I decided on the number one and his name as the theme. Started this cake with a sheet cake then cut the “one” shape out. I frosted the one with very soft frosting and put it on pretty thick to avoid crumbling pieces getting into the frosting.

I used the three inches of cake cut from the side to make blocks on the cake. After leveling out each block I placed them on the cake and frosted carefully. There was just enough cake and space for five blocks to spell out the birthday boy’s name.

For my daughter’s first birthday we were having a huge bash with lots of cake loving people who in turn called for me with my creative cake ideas to make a cake. So I created a cake with all her favorite things.

To start out – select a rectangular pan that will fit your needs and an appropriately sized round pan to set in one corner. I selected marble cake to appease all tastes. I whipped up some butter cream icing and applied a layer to the entire surface of the cake. The flowers are made from the royal icing recipe from Wilton’s magazine. Piped with a rather small flower tip (I made a lot, got a bit carried away).

The customizing of the “favorite things” was the most fun. My daughter loved certain things… fish bows toys with tags, cats etc. Everything that was her was present! Everyone loved looking at those items and in the end had no problem eating them too.

I usually use sponge cakes or pound cakes to make my creative cakes and I thought it would be nice to have a different kind of cake for a change.

I put together the ingredients consisting of cocoa biscuits, butter and condensed milk. You mix them together until semi sticky and mould it into any shape you want and leave it to set in the fridge. It’s better if you make it a day earlier. Roll out sugar paste according to the size needed.

You can color your paste using food coloring but make sure you knead it well to ensure the color is well mixed. (Tip: use gloves when adding food coloring because it stains your fingers.) After rolling it out place it on cake and continue to press down on the edges and decorate.

I used 3 pounds of butter cake for the decoration. My sister wanted a creative cake for her baby girl and she asked me to make the number cake. For covering and decoration I used fondant icing (earlier I made some number cakes using butter icing, and so I wanted to do some change).

For the background I used desiccated coconut. I think small ones would like these colours.

The N0. 1 is about 45cm long (I had to cut the cake according to the shape). Animal and sleeping baby: I saw a picture of a creative cake like this and tried to make them in icing with a 3D effect. Border: Free hand design with royal icing.

I came up with this creative cake idea for my niece on her first birthday! Since my Sister-in-law had invited all of the family, the cake needed to be pretty large to feed everyone. The idea for this creative cake came from the party invitations, which had a giant #1 on them and were surrounded with butterflies and flowers. Instead of the traditional “baby” first birthday cake, I thought this would be fun!

I used a large sheet cake pan for this cake and two box cake mixes. Then I baked the cake, allowed to cool (again, placing cake in the fridge helps the cutting process), then cut the cake into the shape of the number 1. I iced the top and sides smooth, using the pink on top and white on the sides. Then I used cookie cutters to imprint the flower, butterfly, and my niece’s name on the top of the cake. I then outlined and filled in the designs with icing. To make the designs smooth, I dipped my fingertip in cornstarch, then “patted” the icing until the area was smooth. The oils in the icing will absorb the cornstarch in a matter of moments, so you won’t see it. The border was created using a star tip and icing tinted lavender.

I got the idea for this creative cake for my Granddaughter’s first birthday from the napkins and party supplies my daughter purchased. I used food color markers and traced the images on to rice paper. Then I baked the cake according to package directions. I then iced the green, purple, and yellow patches on the top of the cake. Once completed I placed the rice paper drawings on the cake. I outlined them in the appropriate colors using a #3 tip and then filled them in using a star tip. The plate had this pattern in the middle and a pink and white checkered pattern around the outside.

I thought that using a basketweave tip and trimming the outside would look the best. After completing the basketweave I trimmed the cake and wrote happy birthday. In the flower on the 1, I wrote “st”, so that it would read happy 1st birthday Macy.

This creative cake was made for my daughter’s 1st birthday. Since she was only a year old, she was not into characters (Elmo, Dora, etc.), so we had to think of something cute to go with our pink decorations. The cake was simple to make. It is one large sheet cake with 2 small round cakes on top. We made the sheet cake chocolate and the small rounds were white, to give a bit of variety. Then we also made a 3rd small round cake for my daughter to enjoy by herself, which was simply decorated with a “1”. We decorated the main cake with simple pastels and added a ribbon (not edible) to make the round cakes look like a present. It turned out even better than I had imagined!!

Cake by Ivy P., Hammond, IN

I did this creative cake for my son’s 1st birthday. The cakes matched his party decorations.

For this creative cake, start with a sheet cake and just cut out on the top for the one and sides. Cover with buttercream and add icing flowers, sprinkles, candies, whatever!

For my son’s first birthday, I wanted to make something for all the little kids that would be easy for them to eat and still a little different for every kid, I wanted a creative cake.

So what I did was I made 92 cupcakes (his party was really big– plus I wanted leftovers!) and spread vanilla frosting on each one. Then I bought a bunch of different decorations like Smarties, M&M’s, and Kisses etc. to put on top.

I traced out a number one on the cake board and placed the cupcakes in the outline. After the candle was blown out, each kid rushed to find the cupcake that they liked best. no waiting…no cutting. It was a perfect creative cake!