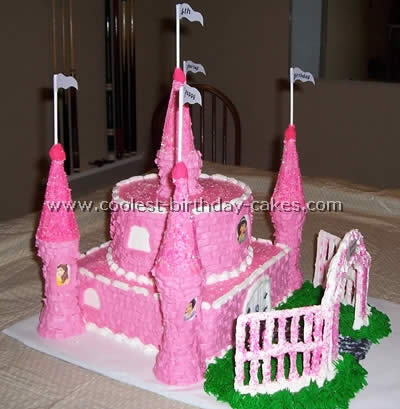 I made this Disney castle cake for my neighbor’s daughter Harley. It is made with four cake mixes, regular ice cream cones and sugar ice cream cones. The towers are made by placing two regular cones end to end and then the sugar cone placed on top, upside down.

I cut out fairy tale princesses out of party gift bags and placed them in the tower windows. The hardest part was the fence and arch. They are made with Royal Icing braced by wooden lolly pop sticks. They need at least three days to set up and they were very heavy. But to me they added a lot.

This Disney castle cake turned out very nice. I loved seeing Harley’s face when she saw her cake. Isn’t that what this is all about?

A lot of my ideas for a Disney castle cake came from this site. I baked cake in the ice cream cones and set them bottom to bottom and used a #12 round tip to make the stone. I dipped the sugar cones in a candy coating and rolled them in sprinkles. The castle is two 8″ square pans and two small round corning ware pans. I iced between the layers and stacked the cakes.

I iced the brick pattern by smoothing gray icing and then used a long knife to make straight lines across and then a tooth pick to make the lines down. I used a star tip for the windows and added a few borders. My son loves it!

Using waffle cones and regular cones I made the pillars. To make the three in the back taller I frosted some paper towel rolls, then topped with fruit roll-up “flags.” Sprinkled flower sprinkles and used pretzels for the walk way. Super fun!

I made this Disney castle cake with my five year old daughter and we had a blast!

My niece wanted a Disney castle cake for her birthday so I gave her four princesses and a castle and carriage to boot. Guess who the favorite aunt is? I got this idea from Wilton Yearbook 2007. For the princesses I used the mini wonder cake pan then I lightly iced the bottom half of the cakes and covered them in fondant. Took the mini doll picks and added them to the cake and made the bodies of their dresses out of fondant as well. For their hats I took tip #3, covered them in fondant and threaded ribbon up through the holes and scissor curled it.

Then for the carriage I took the sports ball pan and filled each half with melted white confectionary chocolate then I let it harden enough to form a thick shell and poured the remainder out. Then I took melted chocolate and pieced the halves together then decided where I would like the windows to the carriage and took an exacto knife and carved the windows out. The decorations on the carriage are buttercream icing and colored fondant. the wheels are just fondant circles and I sprinkled them with Wilton sparkles. The horses are cut out of fondant and I used the animal cookie cutter set from Wilton. I decorated them in buttercream icing also.

Now for the Disney castle cake; I used a 6″ and 10″ pan and Wilton’s Romantic Castle Cake set (instructions to use this is found with kit). After cakes are made and cooled I cut each one in half and filled with buttercream icing and lightly iced and covered in fondant. I used fondant forget-me-nots as my flowers. I used royal icing to cover the castle towers and turret peaks and sprinkled with cake sparkles. She was so surprised when she got this cake. And I was so happy to do it for her!

I made this Disney castle cake for my daughter’s fifth birthday. I had made a similar one the year before but the turrets were so unsteady that it was hard to move the cake (I had done the two cake cones stuck together). This time all I really focused on was getting sturdy turrets. I bought the cake cones, pulled out one row and there was my turret!! I used four cake cones stuck together with melted white chocolate (just poured some in each cone and replaced it just as it came in the box). At the top I put a sugar cone.

As far as the cake goes I used four boxes of cake mix. I made two 13×9 cakes, two 8″ rounds and one 8″ square (plus 12 cupcakes which I saved for my little ones). I put the two 13 x 9 cakes together with icing. Then put the two rounds on top (with icing in between each layer). Finally I cut the square into four equal pieces but used only two for the top layer. Then I cut the corners off the 13 x 9 layers and set the turrets into the spaces. I then used dowels to secure the rest of the layers (I actually used four chopsticks).

I put a sugar cone over the tops of the chopsticks. For the sugar cones I rolled them in icing then pink sparkle sprinkles. I used a Hershey bar for the door. I used Nestle Sticks for the drawbridge. For the window I used Pepridge Farm Chessman cookies and lightly iced them to look like stained glass. My daughter’s birthday was close to Easter so I was able to find pastel M&M’s which I used around the turrets. I used pastel chocolate covered eggs for the trim around the castle. I used dark chocolate Hershey kisses as well.

For the ivy I used “Sour Spaghetti”(just the green pieces). I found little Disney princess figurines at the dollar store to complete the look. We had the party at a gymnastics studio close to our home. The cake made it intact and was a big hit! Nobody believed I made this Disney castle cake myself. Took a long time but worth it for my little princess!

This is my granddaughter’s Disney castle cake. it has six boxes of cake mix on a five layer cake and buttercream frosting. The pillars are made of champagne flute, right side up covered with pink fondant, top with a sugar cone brushed with apple jelly and sprinkled with pink candy flakes. Pictures are not edible. I didn’t have time to get them done so I used a copied picture decorated with party favor and a picture frame of my princess.

I made this Disney castle cake for my daughter’s sixth birthday. It was a first attempt but turned out quite nice. Basically I used a 10’square tin and 8′ round and a 6′ round. The cake was covered in dyed sugar paste and the turrets were made out of sugar paste, made with icing liquid, glucose gelatin and a little water and they were rolled around tubes and left to go rock hard. The cake probably took me about 12 hours in total of a course of four days.

This was really a miracle that this Disney castle cake turned out so well.

Before I made the cake for my son’s fourth birthday party I looked at tons of pictures on this site for inspiration. Thanks to everyone who helped, it came out pretty cool!

This is my version of the Enchanted Castle cake by Debbie Brown. I made this for a friend’s daughter. It was the third and final cake. The first practice cake I did with fondant but it didn’t turn out well so I decided to try it a different way with buttercream. I did check out another Disney castle cake on this site, but it was not what we wanted. Since I couldn’t do the path out of fondant or fill out the sides with cake chucks like she does, I carved the path out of the cake directly.

The mountain is made from 8 inch, 6 inch and 3 1/2 inch cakes. They are stacked up off center so the wider patch of uncovered cake is in front. Then I cut diagonally down the side of the cake to make the path. The castle on top is fondant covered cake. The ribbon with the name is also fondant and I stuck the candles behind it later.

My daughter loves Princesses so for her fourth birthday we made her a Princess Disney castle cake. We made three cakes in all. Two 9 X13 cakes and one cake made in a bread pan. I made Wilton’s butter cream icing and spread a layer in between all the cakes and layered them on top of one another. I then covered the entire cake in a light layer of purple icing. I took pink icing and covered the tops of the cakes. To make the bricks I took the Wilton tip #10 and made random blocks on all the walls.

The towers are made out of sugar ice cream cones covered in pink icing topped with flags made from paper and tooth picks. To finish the cake off I used marshmallows, M&Ms and different color icing. I found the princesses at the local dollar store which made the whole cake a success.

This Disney castle cake was for my little girls fourth birthday. I used this site to get different ideas and tips on icing etc. as this was my first attempt at cake making. It was made from three homemade chocolate sponge cakes, two 10″(for the bottom)and one 8″ for the top. I put Betty crockery chocolate icing in the middle of the 10″ cakes.

I used white regalice to cover both cakes and decorated with pink icing between top and bottom cakes and ready made princess cake decorations. The towers were made from ice cream cones stuck together with apricot glaze and also used apricot glaze to stick the sprinkles to the spires. I covered each tower in a thin coating of icing sugar. The cake board was covered in green icing sugar. The flags were made from wafer paper with the number four done in glitter icing and attached to cocktail sticks and placed in towers.

Cake by Jennifer B., Carrollton, GA

I made this Disney castle cake for my daughter’s third birthday. The bottom of the cake is a two layer 9×13 cake and the top is also two layers that I cut to fit on top of the larger cake. I used buttercream icing. I also used sugar cones. I coated the cones with icing and rolled them in sprinkles.

I used toothpicks and construction paper for the flags. For the princess I used an upside down cupcake with a plastic doll stuck in it. I got the idea from a magazine and this site. Buttercream icing: Mix 1 cup butter and 1 cup shortening with electric mixer then add a 2 lb. bag of powdered sugar(sifted), 1/3 cup of milk and 1 tsp. of clear vanilla extract and mix with electric mixer. Add food coloring if you want a different color and if you want to make it chocolate just add cocoa and a little extra milk.