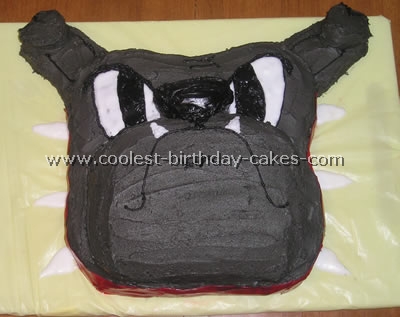 I browsed this site for ideas for dog cakes to make for my son’s birthday party at school. He is very devoted to his school, the Vicksburg Bulldogs! It was made with a 9×13 cake pan. I cut 1/3 of the end off and then cut a two inch strip off of the third (to make more of a square). I placed the square on top of the 2/3 cake to make the muzzle and then used the two inch strip to assemble nose and ear pieces.

I frosted the whole thing in a lovely deep grey color and piped on the details. The collar is made out of fruit by the foot and the spikes were piped directly onto the plate.

I have never made dog cakes before but this one really turned out great!

I wanted to try making dog cakes from a Wiltons cake pan design so I found the cutest pan on EBay (101 Dalmatians). I made a chocolate cake and mixed up a big batch of buttercream icing in the colors of brown, black, white and pink. I outlined a few features of the dog and just started to fill it in with stars. I was so excited with how cute this turned out. It looks just like my boxer when he was a puppy!

My two year-old daughter loves dogs so for her birthday I searched dog cakes on this site and this is what I made. I used some clipart, enlarged it to about 9″ tall and cut it out of a 9×13 yellow cake (made from scratch).

These dog cakes were made from two Muffin size cupcakes. I trimmed the tops off to make them level and turned them upside down. I piped icing up the sides and all the way around. Piped a little hair on the top and tied a colored ribbon in a bow and put the bow on top of the hair and then piped a little more hair on top of ribbon. Lastly I piped the eyes and mouth.

Make a square pan cake and a bread loaf pan cake. Put some extra flour to make it thicker for stability. Freeze it. It was like drawing. I started with raw shapes and put them in place.

I used the loaf cake for the body. I did trim it down. I angle cut the corner of the square cake for the head. For the hind legs I cut a third of the square cake. Then cut that in half and placed the molded sides out. I did some minor curve carving on the head. Attached the ears and covered with a lot of frosting. The front legs and tail are just carved pieces I placed next to the body.

I melted the Coconut Pecan frosting in microwave and basically poured it on. I did see a few pictures on this site for dog cakes to jump start my creative process. We also have a Golden Retriever that I studied a little. My son really wanted a puppy for birthday so we decided on the cake since we already have a dog.

Cake by Mark B., Charlotte, NC

I started with two quarter sheet cakes stacked and carved out the shape of the dog’s head then iced with buttercream. The coloring was all done with an airbrush.

I got some of my ideas on this website for dog cakes but made a few changes. Nobody believed my dog, it looked too real!

Using a Wilton puppy dog pan I used a lot of black food coloring from a pot and mixed it with chocolate frosting so it would dye easier. Then using a star tip I frosted most of the Dalmatian in white leaving spaces for spots and then filled in the spaces with the black frosting.

I used black frosting with a small round tip to add the little details. My son had lived his whole first year in a Dalmatian inspired nursery and this was a wonderful way to celebrate his first birthday.

Good luck with your own dog cakes!

Cake by Kim B., Hilliard, OH

My eight year old is obsessed with dogs. The only thing she wanted for her birthday was a 3D dog sitting in a dog bowel filled with dog food. I have no idea how she came up with the idea of dog cakes!

I used the Wilton 3D Winnie the Pooh pan for the dog. Turning Pooh Bear into a dog is all in the decorating. I used fondant and rolled it in the shape of a muzzle and attached it to Pooh’s face with icing. I then iced him to resemble a beagle (i.e. one brown eye).

The “dog bowel” is two 9inch rounds. I’m not sure it really looks like a bowel. In hind site you should hollow out part of the top cake to make it look more realistic. The finishing touch is the dog food. We used Cocoa Puffs which is definitely tastier than real kibble!

My daughter turning 4 INSISTED on a Kipper birthday party but since Kipper the Dog hasn’t “crossed the pond” as they say from England. I had to come up with a kipper birthday all by myself so I went to your website and found dog cakes which I just copied. Thanks!

This cake was so simple. Bake an 11×13 cake and round off the corners. The corners become the ears. Ice with reddish brown and white icing with dark brown for the ears. She was thrilled to see her kipper cake.

My son really likes animals especially dogs so I decided to do Spot. This cake can be made from any Spot picture (Spot is a basic shape). To make the template trace the picture of dog cakes you want and enlarge it on the photocopier. I made a cake and cut out the shape from the template.

The spot and tip of the tail is made from chocolate (I traced the tail and the spot on grease proof paper and shaped it. Allow the chocolate to harden in the fridge. The outline is made from a licorice rope (cut in thin stripes).

For the nose I used an apple corer to cut the licorice to make nice even circle. The mouth I used a marshmallow cut in half. The eyes I used sultanas. The present you can decorate as you wish (I used Smarties and ribbon).

I made this cake for my nieces and nephews who asked for a cake to celebrate my Shih Tzu ‘Alfie’s’ First Birthday. This was my first attempt at cake decorating other then the plain old icing and sprinkles!

I found some ideas on this website for dog cakes but in the end used a cat cake template from the Australian Women’s Weekly Kid’s Birthday Cake recipe book but turned the ears around to make them floppy downward ears. I baked a basic butter cake in a 22cm round tin (forming the head) and one 8cmx25cm bar tin (used to cut out the ears). I then used the off cuts off the bar cake to make the raised ‘snout’.

I used Betty Crocker Creamy Deluxe Vanilla Frosting and ‘swept’ the icing around to look like his flowing hair. But you could easily use a home-made butter icing – I was just running out of time. The kids love icing more than cake so I used lots and lots of icing just for them. I colored the frosting with food coloring (mixed into different shades of brown) and also melted milk chocolate – acting quickly before the chocolate set.

I made the eyes from marshmallows dipped in milk choc with chocolate Smarties (M&M’s) placed on top. I made the tongue from a pink marshmallow cut and shaped. I then used flat liquorice cut into strips for the eyelashes lips and nose. I used a white marshmallow to raise the nose slightly. I then used little silver cachous (balls) for the studded collar.

The cake was a hit with the kids and adults alike – I think this cake could be adapted easily to make many fluffy styles of dog cakes – just use your icing knife to sweep the hair in whatever style your dog has!

Basically, my eldest daughter wanted yet another homemade cake although this would be the first for her since she turned three. I purchased her one for her 4th birthday but this was for her 5th and this would be the cake to end all cakes…hopefully!

She requested a dog cake, actually a Puppers cake…her favorite stuffed animal that she takes everywhere and sleeps with.

I used a chocolate cake mix and made two flat cakes and carved away to get the shape that I desired.

The eyes were half black jelly beans and I dyed the chocolate icing a darker brown for the ends of the paws. I mixed in a little bit of coconut to give Puppers more texture. He was yummy!