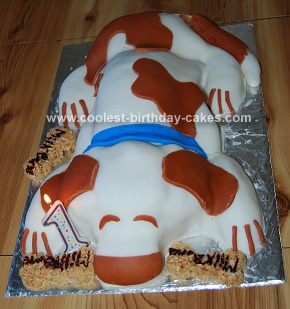 I made this Homemade Saint Bernard Dog Cake Design for my daughter’s 1st birthday. She loved our dog Digit so I was inspired to make a Digit cake. This cake is special for the whole family because Digit is no longer with us. It is like a memorial cake now. I am so happy I made it.

I used 3 loaf cakes and two round cakes. I cut them into various shapes to form the shape of “Digit” laying down. I cut the round cakes into a square and used the round edge pieces left over for the front and back legs. The rest of the rounds were used to make the head shape. Then I cut into the round to make a square nose shape. One whole loaf was used for the back and another loaf cake was put perpendicular to the first for the hips and tail end of the dog. The last loaf was cut in half and put on sides to fill out the dogs waist.

I used homemade almond flavored buttercream icing to glue the pieces together and then cover the whole cake.

With the help of my husband I made a double batch of fondant. I left the majority of it white and colored half of it brown and a small portion blue for the dog collar. It turned out but was hard to roll thin and get it large enough to cover the entire cake. We needed to cover the body portion with one piece of fondant, then cover the head with another. To cover the seam I rolled out some blue fondant and cut it into a strip. it covered the seam well and looked just like a collar.

For the tail I used fondant and rolled and shaped it into a tail and just laid it near the back. It looked fine. The brown fondant was rolled out with a rolling pin and we used our dog for a model. We tried our best to match his markings. It turned out that “Digit” had a heart shaped spot on his side so we put a heart on the cake to make our daughter see it was a “Digit” cake. Eyes and nose were also just cut from the brown fondant. As an extra treat for birthday guests I made “Milkbones” out of rice crispies. I used store bought icing tubes that had fine tips to write on the bones.

This was my first cake with fondant and we wanted to try to make everything ourselves. I would suggest getting store bought fondant. I found it easier to roll out and the recipe I had to make it used many ingredients and was difficult to roll thin. The finished cake is on a board 12 x 22 inches ( if I remember correctly) in size. 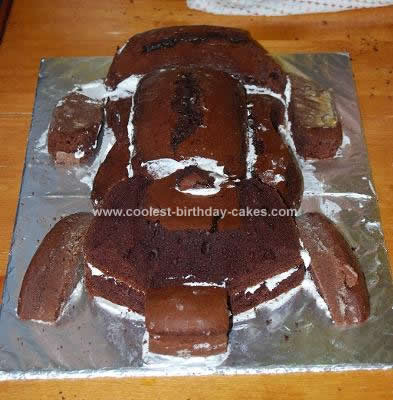