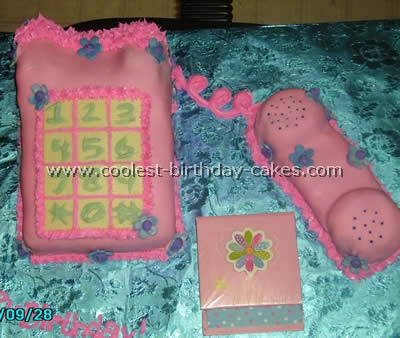 I make many easy cake recipes so my uncle called me and asked me if I could make a telephone cake for my cousin Morgan because she is on the phone all the time. Four hours later I had this. Not bad for a 14 year old!

For my daughter’s 8th birthday she picked out the “Glamour Girl” party theme. She said she wanted a cell phone cake.

At first I had planned to just make the cake look like a cell phone, but then I came up with the idea to make the cell phone out of rice crispy treats. I followed the easy cake recipes for Rice Crispy treats and cut into rectangles.

I melted pink candy melts and covered one side of the crispy treats with it. Then placed black and white M&M’s on top for the cell phone buttons (if you put the M&M’s on the right away before the candy melts set, then they will stick nicely) and cut a square out of a fruit roll-up for the cell phone display screen. Black licorice with a toothpick inserted down the middle was the antenna.

I made enough of these “cell phones” for each Glamour Girl at the party!

For the big cake, I simply used one of those easy cake recipes for a double layer round cake and decorated using the party theme colors for inspiration, and stuck a cell phone on top!