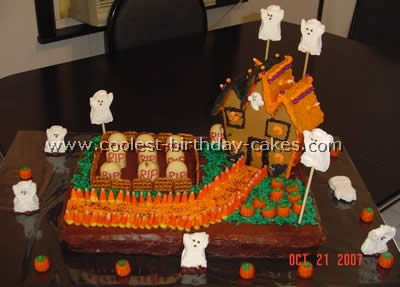 I made this haunted house cake for my friend’s daughter birthday. She was born on Halloween. When she saw the cake she loved it. I used two 9×13 cake pans (one cake mix for each pan). Let the cakes cool. Put them side by side on the display board. Make the cake tops even. You could put them in the freezer for easier frosting for about one hour. (If you still have problems with the cake crumbs coming onto the frosting use white corn syrup. Put a little on the spreader and it should glide over the frosting much easier).

I used chocolate frosting for the top of the cake. I bought an edible haunted house kit from a craft store. After it was assembled and set I put in on top of the cake. I then made an orange path with icing in the can. I used candy corns to line the path. You could also use orange and black sprinkles for a little decoration on the path. 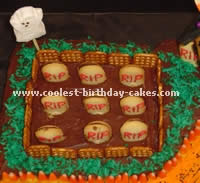 For the fence of the graveyard on the haunted house cake I used waffle pretzels.. Each tombstone I used Milano cookies and wrote RIP in red icing. I used coconut flakes for the grass and added green food coloring to it. Sprinkle it around the graveyard and on the other side of the path. I also used pumpkin candies for decoration. Above the house I used ghosts (peeps) on skewers. You could also decorate the display board with ghosts and pumpkins. Put a little frosting on the bottom of the items so they will stick and not fall off. 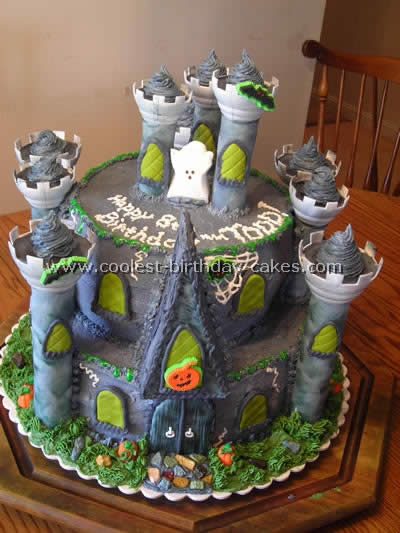 I used the Wilton castle kit. I baked four round cakes for this haunted house cake. The decorating was pretty easy. I covered the pillars with gray fondant and the cake was frosted in gray buttercream frosting. I just followed the directions that came with the Wilton castle kit. I added some candy decorations. A marshmallow ghost and a candy rock walkway. It turned out really cool! 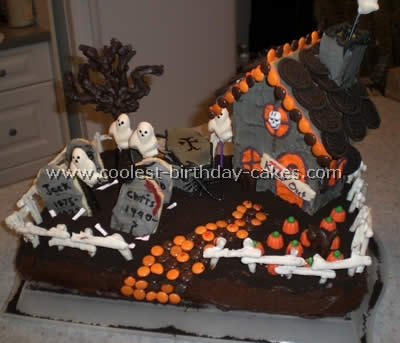 This haunted house cake won first prize at our workplace Halloween event. I used two cake mixes and three containers of icing. The house was hand made from graham crackers and homemade icing tinted grey. The gravestones and coffin (in the back) is just a simple sugar cookie recipe. I used chocolate covered pretzels for the tree and fence and a few candies and plastic creepy crawlers as accents. 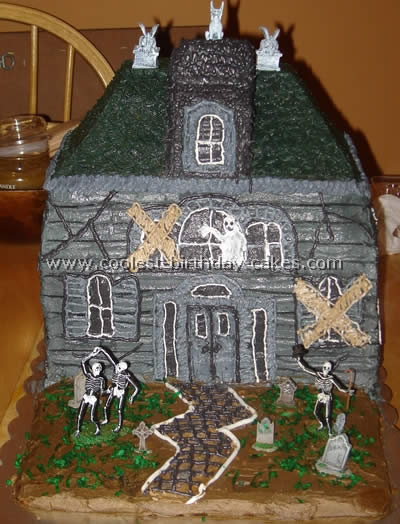 My boyfriend’s birthday is on Halloween and this year he requested a haunted house cake for his big party. The first three layers are vanilla cake with raspberry buttercream frosting, the next three are chocolate rum with peanut butter frosting and the lawn and roof are carrot cake with vanilla buttercream frosting.

The structure is held up by cardboard and dowels, every three layers which also helped to separate the different flavors.

The dancing skeletons, gargoyles and headstones are not edible. The grass is shredded coconut dyed green (got the idea from a baker on this site – thank you!) 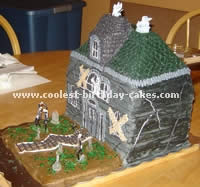 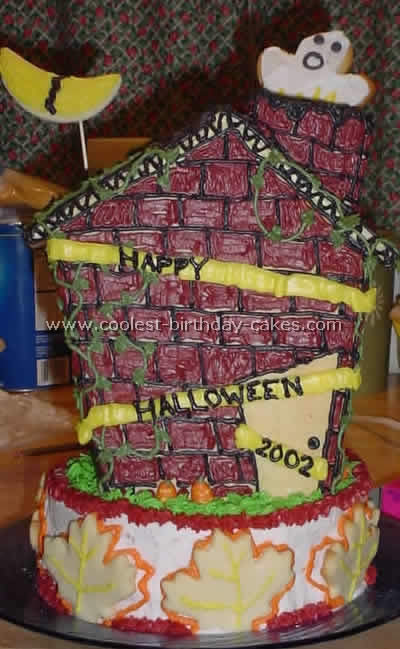 I made this haunted house cake for our Halloween party.

Made wade with crispy sugar cookies, not ginger bread.

I designed the house prior to baking the cookies, cut each sheet out and glued together with royal icing.

I had to use some string to hold it until it dried. I decorated it while placed on the cake. 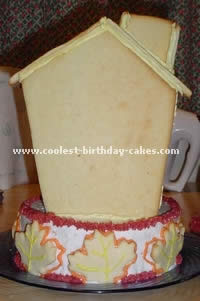 Cake by Silvana I., Mansfield 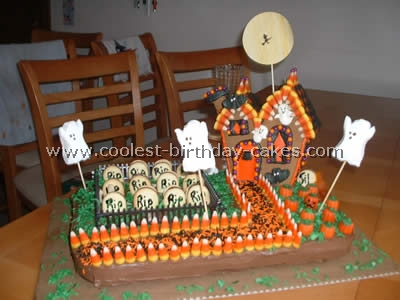 For this haunted house cake, I used two cake mixes in a square-roasting pan. I used candycorn for the walkway with jimmies on the inside, Milano cookies cut in half for the gravestones with gummy skeletons in front of the graves. I used a pre-boxed house kit in the corner with pumpkin patch next to it. 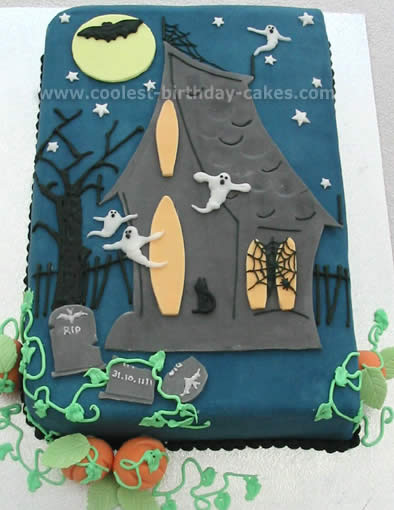 This is the Halloween cake I made for our playgroup; they all thought it was great, so I was really pleased! Everything is edible. The ghosts were run-outs made with royal icing. 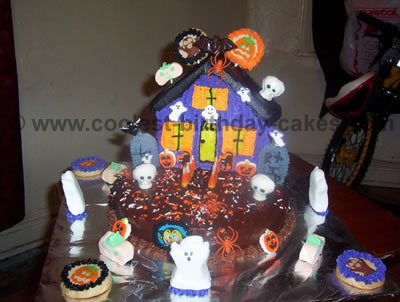