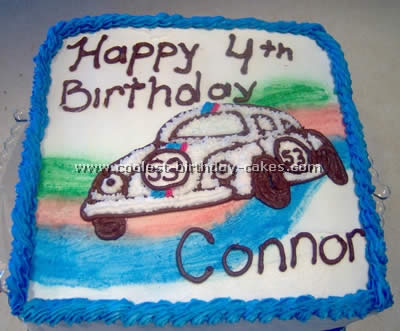 This is Herbie the Love Bug cake is a picture I just drew on the cake and hoped it would turn out! My son loves Herbie and really wanted a Herbie the love bug cake. I baked a simple 8×8 cake and practiced drawing a car on a piece of paper! Then I drew it on the cake!

My son loved this Herbie the love bug cake for his fifth birthday! Boxed cake mix, white store-bought frosting and two-9″ round cake pans. After cakes had cooled overnight in fridge I cut each round in half. Glued three halves together with icing to form Herbie’s body then cut the remaining half into wedges to make Herbie’s front end. Drinking straws were stuck through the body of the cake to keep it from leaning (my husband’s idea!).

Frost the entire cake with white frosting smoothing out with a little cold water. Girl Scout Cookie – Thin Mints with white decorator icing on them make the wheels. Red, blue and black store-bought writer tube icings used for the details. Windows are white frosting mixed with a little black to make grey. Bumpers are drinking straws wrapped in aluminum foil. Driver’s side mirror is a Cheerio wrapped in aluminum foil.

I baked three layers of dense cake in a 9×12 pan layered as a normal cake and free-carved the shape of Herbie the love bug. After that I added a crumb layer of buttercream, let it set and covered with rolled fondant. After carving I carefully moved the cake onto a cardboard cake board and traced the outline of the bottom. I removed the cake and I then cut two layers of cardboard in this shape and glued them together. I then placed the cake back onto the shaped cardboard. (It’s very important to use a dense cake recipe for this purpose).

The wheels were crafted from a mold made with non-toxic flexible molding compound and a wheel taken from a toy car. Once the mold was finished I simply poured in melted chocolate and refrigerated till hard. The rims were painted with silver dusting powder mixed with a little lemon extract. To attach the wheels and raise the car I molded melted chocolate in a two “U” shaped troughs in the appropriate width (Wiltons flower formers with foil blocking both ends) and refrigerated till hard. I shaved off the ends to smooth and attached them to the cardboard cake bottom with more melted chocolate and attached the wheels to their ends under the wheel wells. (This could be accomplished before putting the cake on the boards by the way).

The bumpers of Herbie the love bug were fashioned with white modeling chocolate and shaped over a curved surface covered with parchment. They did not hard-set but retained their shape once attached. These too were painted with the same mixture as the rims. When attaching I used cut-down bamboo barbeque skewers at four critical points and pushed them between the cardboard bottom layer and the cake layer. The detailing was made with rolled fondant and royal icing. The headlights were fashioned with white modeling chocolate.

Overall it took me twelve hours spread over two days to complete.

I started with a double stacked 10 layer cake. Then I used the Wiltons sports ball pan and baked half of the ball. I cut one side of the half ball flat and used this for the base of the car body. I then used the piece I cut off for the base of the hood. Then with lots of icing I shaped the hood and the body. After I got the shape I wanted I added chocolate cookies for the wheels. I finished it off with the stripes and number logo.

This Herbie the love bug cake was simple to do, just take your time to get the shape you want for the car.

My three year old son absolutely loves Herbie the love bug – new and old. So I thought the ideal cake for his birthday party would be a Herbie car. I decided to make my own even though I have never done anything like this before. I took a look at this site first though just for some decorating ideas and how to do it. I did cheat a little bit and hired a Wilton 3d cake tin but even dreaded this as I thought no way will this come out in one piece – but it did. To be honest it was quite easy after that.

I covered the cake in apricot jam and used ivory colored ready rolled icing. I rolled it out as large as it would go and then just laid it over the car. I smoothed it over so it took the shape. I then used licorice wheels for the actual car wheels. I cut out shapes from icing for the windows and then painted them with black food dye. For the bumpers I rolled some icing and covered them with silver foil (obviously removing them before cutting the cake). I used the colored icing pens for his racing stripes and #53 and for his number plates.

The look on his face when he saw Herbie the love bug at his party was worth the effort and the cleaning up afterwards.

Herbie cake by Nora A., Whitehall

My grandson loves “Herbie” so for his 4th Birthday I made him a Herbie the love bug cake. I used a spring form pan. After leveling it I cut it in half and put the half circles together with frosting.

Cutting a little out of the front to create a hood and windshield I covered it with white Fondant. I made the red and blue stripes with more Fondant. I used chocolate cookies for the wheels and gel piping for the out lines.

My grandson loved it he didn’t want to cut or eat it. But eventually we did.

For the Herbie the love bug cake I used a 9″ round pan and cut it in half. I then iced the two halves and stood them up on their flat sides. I cut out the hood and then iced the rest of the car. I used a toothpick to trace out the designs on the car (hood, lights, bumpers, doors and sunroof). That makes it easier to put your icing designs on. The icing was buttercream.

I used a 16″ pan for the square cake and made a racetrack for the car. The flowers on the sides are made of royal icing. I love them because you can put them in a Ziploc baggie and use them for months.

I made this Herbie the love bug cake for my daughter’s 6th birthday last year. I loved the Herbie the love bug movies growing up and the new movie had just come out. I used the 3d car pan on a sheet cake and decorated as best I could. I’m learning as I go; I haven’t yet had a chance to take a class, so I just experiment. All the frosting is buttercream.

We were not planning for a big birthday bash for my son Ezra on his 8th birthday as he was preparing for his final exams. But to make him feel really special I decided to bake him a cake and celebrate at grandpa’s house- just a simple afternoon tea with the family.

He said he wanted a car cake but did not expect to have a Herbie cake. He loves Herbie the love bug and Lindsay Lohan too (look closely).

I baked a round cake, cut it half in diameter and stuck them together with butter icing. Let it stand up right on the cake board on the flat side. You’ll get a dome shape. You’ll have to shape the windscreen by cutting some cake out.

I didn’t bother cutting out the shape for the Herbie the love bug wheels, instead I stuck some Oreo cookies on it. I iced it with white butter icing and drew the lines just like in the picture. Of course- Lindsay Lohan was a bonus!