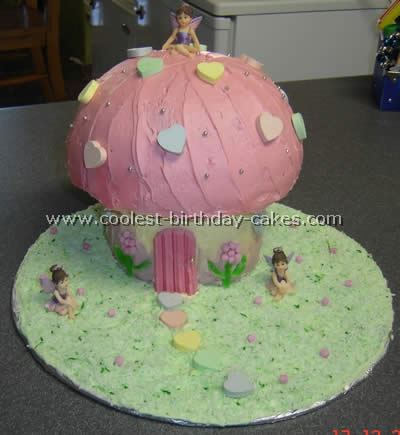 I used two oven proof serving bowls for this cake and a homemade cake recipe. I cut the bottom one down to make it look like a stem, the only warning I have for this cake is use a sponge, not a moist heavy cake as it will crush the bottom cake being so much bigger.

Cut a piece of cake the size of the base of the large cake and place under for support when constructed. When you go to add the top would put kebab sticks or something like that in the bottom one so when you put the top on it won’t crush it. I just used butter icing for the whole cake and decorated it with delicate lollies to make it look girly. I love this cake so much it was my first ever cake I have made I made it for my daughters first birthday and have also gone on to make a lady bug which i will add to this site as well.

I got the idea for this cake from Australian Woman’s weekly cake book and just used a homemade cake recipe for the actual cake. I prepared the mushroom top by using the Betty Crocker Bake-N-Fill pan and the stem with a regular round cake pan cut down to size. I decorated the cake using different candy and for the little mushrooms I used marshmallows that I cut and twisted. To top it all off I then added some little fairies.

I made this cake for my daughters first birthday. It was a homemade cake recipe. I used two bowls to bake the cake and supported the top half with a piece of cardboard cut to size. I used fondant icing for the decorations and sugar and food coloring for the grass.

I made the cake itself with Pyrex bowls from a homemade cake recipe. When baking them make sure you bake at a low temp for longer so you don’t burn the outside of the cake while the middle is still under cooked.

I “drew” on some tinfoil with melted baker’s chocolate for the door and windows. Next I frosted a rectangle cake board with green frosting. To make it look like grass I took a knife horizontally and dabbed the frosting on. I crushed some peanut M&M’s for the walk way. The spots are fruit rollups I cut out with cookie cutters.

This cake was made for my son (turning 3) and my daughter (turning 4) who’s birthday’s fall near each other. I wanted a homemade cake recipe to do with fairies for my daughter and my son liked bugs. So I combined the two ideas and formed a critter/toadstool birthday cake for the two.

My mother baked and sculpted the cake using Betty Crocker’s super moist butter recipe cake mix. We followed instructions written in “Quick and Easy Novelty Cakes” by Carol Deacon pages 22 & 23. The base of the toadstool needs to be covered in rolled out white fondant first and three dowel rods need to be cut to the height of the base and evenly placed in the center to sustain the top.

The top of the toadstool needs a cardboard cut around it’s circumference to be secured underneath (we used royal icing to glue it into place). Be careful to center it correctly or it may slip off or tilt as ours did.

I decorated the cake using all fondant with the exception of the sugar tinted in green food coloring. All of the critters aside from the snail were created out of my imagination. It was loads of fun and the guests enjoyed the cake.

This homemade cake recipe was quite easy, just time consuming (aren’t they all!?). I hired 2 Dolly Varden cake tins.

The larger one, I used for the top of the toadstool, but just cut the pointy end off the cake to get the shape I needed. And I just leveled the cake with a sharp serrated knife (it rose on one side more than the other!!), to make it flat.

I used the smaller one for the base (again, cutting a small bit off the pointed end to arrive at the right shape). I cut a circle of cardboard to sit under the roof of the toadstool so it would sit properly.

I used 1 and a half quantities of butter cream icing. One quantity = 125grams butter, softened. 1 and a half cups (240grams) icing sugar mixture, and 2 tablespoons milk. Beat the butter with an electric mixer until it is as white as possible. Gradually beat in half of the icing, sugar, milk, and then remaining icing sugar. Flavour and colour as desired (I always put a teaspoon of vanilla essence in my butter icing to make it taste nice!).

Then decorate your toadstool as desired. I used musk-sticks for the door – just cut the tops on an angle, to make the door shape. I use the same cake board for all my cakes…I just cover it with coloured wrapping paper to suit each cake!

This homemade cake recipe was very simple and everyone loved it…especially the birthday girl!

I made this toadstool cake for my seven year old niece. The base and roof were cooked in bowls of the same shape (no need for cutting). Roof was on a board, which was held in place by royal icing with skewers in base to carry the weight. All icing was fondant, coloured and cut into required shapes and sizes. Grass was made from coloured sugar.