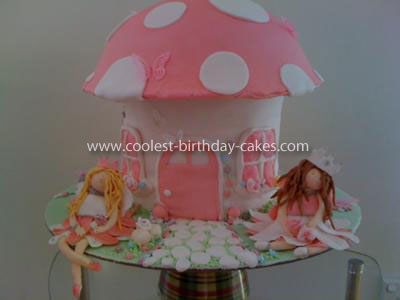 For my daughter’s second birthday I wanted to make something special. As the party theme is Fairy’s I decided that the cake would need to be special! I did a little bit of research on line but couldn’t find anything that was just perfect.

I have never made fondant people before let alone fairies! Since I have two girls I had to make one for each. My eldest daughter has dark hair so her fairy had to be of course dark. The birthday girl is blonde so of course her’s is fair.

I started with the theme being pink and white, so both fairies’s where in reverse of each other. I made their bodies first, and then legs out of flesh colour. I made the pretty dresses and gave them a pattern out of lace. I did the upper body, head then arms. Next came wings and hair, which I twisted and glued with edible glue. I place edible decorations over bodice of dress and wherever I thought or needed extra cover.

The Fairy Toadstool Cake was a tad harder to make. It was a trial to find the perfect size tin to make the base out of. I used three cakes put together with buttercream icing. I gave the whole thing a coat of buttercream. I placed the rolled out fondant around the cakes. I then placed it on the largest board that I could buy. I had already covered the board with green tinted fondant.

I made a door out of pink fondant and indent it with a knife to make it appear wood grain. I then made the windows which were hard to get even. I glued all this on with edible glue.

I piped buttercream icing all around the base to appear like grass. Using just a one hole piping nozzle. I had pre made flowers and little caterpillars and a bunny. I made stones tinted with flesh coloured tint and white stones at the front door. I piped grass in between the pebbles. I went all around the cake adding vines with flowers on then over the cake.

I placed the top of the mushroom on that I had already covered with pink fondant and cut different round circles to place over it. I put butterflies over the top, as well as throughout the cake.

I was very proud of my first attempt at a cake like this! It was actually quite easy. Although time consuming, and I didn’t want to cut it! 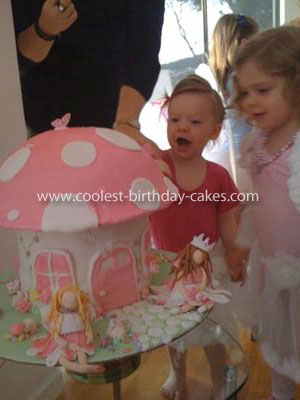 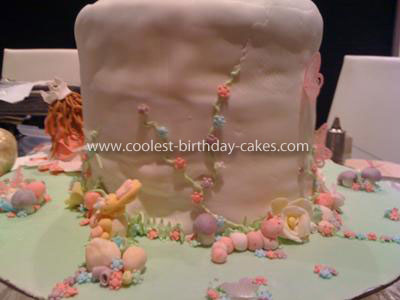