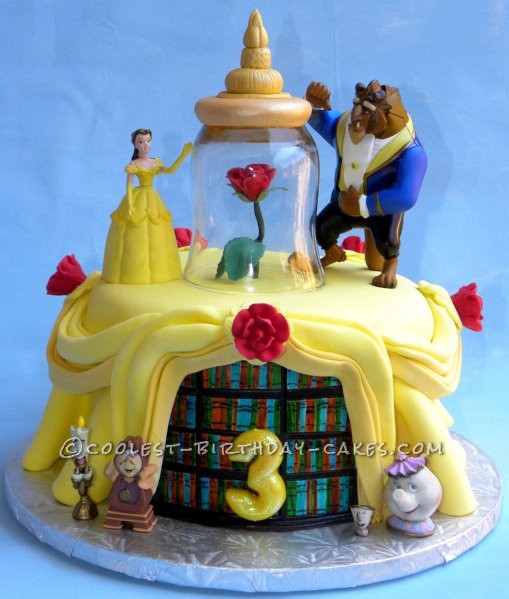 We are a “Disney” family and when my granddaughter decided she just had to have a Beauty and the Beast cake, I was torn on how to do it without violating Disney copyright. So what I did was create a “background” cake for the licensed characters to sit upon and around!  The cake is a simple 8 inch by 4 inch high lemon cake. I covered it in vanilla butter cream and then the layer of golden yellow fondant.

I took a panel of white fondant and painted the “library shelves” onto that. This was harder than I thought it would be. With most painting you want it to be perfectly straight but with library books you want them to look a bit crooked, like one book is resting upon the other. This is hard to do because you automatically want to draw the lines straight! When this was dry I added it onto the side of the cake with a bit of water as glue.

Now it was time to add the flounces that is on Belle’s dress. These are just little rectangles of the fondant that have been gathered up and connected to the cake with water. I added a bit of brown to some of the golden fondant and thus created the slightly darker flounces around the cake. I just used toothpicks to place the roses onto the cake. The center rose was a real challenge! I wanted a bell jar for the top of the cake but all of the ones I found online were horribly expensive.

Finally I used an upside down juice glass! I just used fondant to make the top and finial and then painted them gold! The rose inside the glass was, originally, a sugar rose but when I went to put it into the jar I dropped the rose and it shattered into a million pieces! Fortunately I still had more of the roses I had used on the side of the cake so I used one of those instead of the one I had made.

The cake was an enormous hit. Our granddaughter was so happy with it that she kept dragging people over to see it….even if they had been dragged over four times already! We had her party at a public park and we even had strangers coming up to see it and ask how I made it.  This is, by far, one of my favorite cakes!