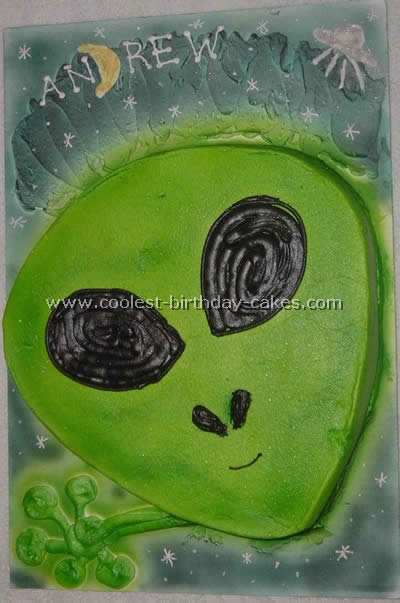 For this kids cake I used two chocolate Duncan Hines mixes baked in a large heart shaped pan. I trimmed the cake at the top to rid it of the bumps. After smoothing the buttercream icing with a paper towel (allow icing to set for a few minutes then go back with a paper towel and gently smooth it all out.)

I airbrushed the alien head. Used chocolate icing to mix up black and piped the eyes and nose. (Regular icing doesn’t smooth like buttercream) I then added a small hand at the bottom.

My imagination took over and next thing I know I have a painted board and skyline….complete with the child’s name in the stars and moon. Not to mention the spaceship. For the moon and the ship I used edible glitter dust to make them shimmer.

While flipping through an October issue of a parenting magazine (where you can find some good kid cake ideas), I found the cutest cake for my son’s birthday. It was a Halloween cake with chocolate icing that looked like hair and all sorts of candy eyes poking out all over it.

My son was having a “Monster” themed party, so a cake with monster eyes was the perfect idea! I don’t do a lot of baking so I opted to have the local ice cream shop make a round ice cream cake, letting them know that I’d decorate it (to bake it, though, it’d just take two round cakes stuck together with icing and then decorated the same way).

The chocolate brown of the icing (in the magazine) wasn’t right for the brightly colored monsters in the birthday theme, so I chose to change it to a lime green color. I used a star tip and piped short lines all over the cake in random directions to make it look like a hairy green monster.

To make the “eyes”, I went to the local candy store and bought small handfuls of any kind of round candies I could find – gummy rings, life-savers, mini M&M’s, Tart’n’tiny’s, peanut M&M’s, Mentos, etc. I used white icing to stick them together to make different kinds of eyes.

I added glints with little drops of white icing to make them more “eye-like”. I found two big gummy eyeballs that were perfect for the center of the cake so I stuck those right in the middle of the top and put the rest randomly around, “looking” in different directions.

I added candles and had a great monster eyes kid cake! It was a big hit and all of the little boys wanted eyes on their pieces of cake. The little girl who was there wasn’t so sure about that, though ;)

This kids cake was made for a friend of mine’s son. The space ship is a bowl with fondant around the edges. The lights are M&M’s.

The aliens are fondant too.

I made this Alien kids cake using the Wilton Animal Crackers pan and an oval pan. I placed it on an over-sized board and positioned the cakes together to form head and body. Some trimming of the ears was necessary to get the pointed effect. After decorating the head and body, I piped arms and legs to complete this silly little alien!