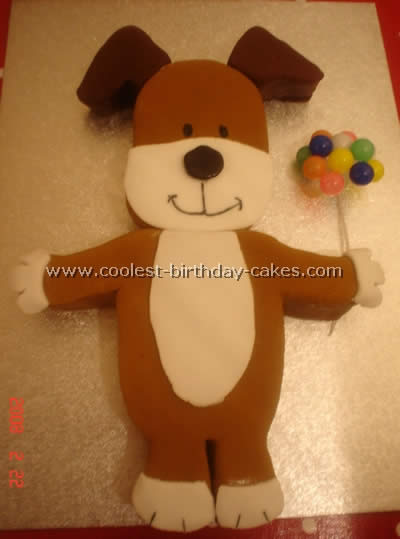 For this Kipper the Dog cake, a simple heavy mixture of cake was created approx 12inches by 14 inches. I copied a Kipper the dog picture onto A4 paper and enlarged it to approx A3 size. I cut the individual segments out and once the cake mixture was ready, cut around the segments (body, head, ears, etc).

The icing is tricky as I could not get the lighter brown colour so I had to mix paprika coloring in with yellow and green to the white icing. The dark brown was easier to get as that comes already brown or brown coloring is easier to find. Care was taken to wrap the rolled icing out over the desired areas. A pontifract cake, (liquorice) nose and a liquorice pen to do the mouth, eyes and feet.

This Kipper the dog cake was from a book that came with a Kipper soft toy and a blanket. I couldn’t quite manage tartan for the blanket but used luster dusts in a crisscross pattern to give the effect. I made Kipper from a mixture of fondant and gum paste for extra strength and painted the bits you can see. The bits under the blanket are a bit rough and ready but you need them to make the blanket drape nicely.

The basket weave round the sides is made from butter icing and isn’t as hard to do as you might think. Do the uprights first ensuring there is an even number and then ice horizontally stopping where you go ‘under’ and then starting again on the other side.

My daughter loves Kipper the Dog videos (it used to be a cartoon series on Nick Jr.) so I decided to make her a Kipper cake for her second birthday. But since Kipper is a British creation you can’t really find much Kipper stuff here in the US–no cake pans or party favors. I got on this site and found one lady who made a gorgeous Kipper cake for her son and I followed her tips.

My cake was much smaller than hers but it was the first birthday cake I’d ever made and I thought it turned out very well. Kipper and his friends are always playing on “Big Hill” and at the pond so my cake had a pond and a big hill. I made two 9×13 yellow cakes and a chocolate cake in a small round Pyrex mixing bowl for my hill.

I stacked the two 9×13 cakes with a layer of green buttercream and placed my chocolate hill cake on top. It was so small that I didn’t use any supports but if you made a bigger cake and a bigger hill or if you planned to transport it anywhere you might want to use toothpicks or dowels to support it.

Then I dug a small pond out of the top cake. I stuck the cakes in the freezer for about 15 minutes and then did a “crumb coat” (thin layer of icing) of green butter cream icing and a layer of blue icing in the bottom of the pond. The layer of icing in the pond makes the pond look extra blue and keeps the piping gel from seeping down into the cake. After the first layer of icing set I did my second layer and got it really smooth by dipping my off set spatula into a glass of hot water and running it over the icing. I filled the pond with blue tinted piping gel. You can buy it but it’s kind of expense for the amount I needed. I just “Googled for “piping gel recipe” and found a recipe for it.

Then I used a grass tip to cover “Big Hill” with grass. I’d never used this tip before and was surprised at how fast and easy it was! Then I used a star tip to do grass around the pond and the bottom of the cake and I put store-bought icing flowers on to make it look “girly” for my daughter :) For Kipper I got online and found pictures of him and printed them off on my color printer and then cut him out and taped him to a straw and stuck him on top of “Big Hill”.

For party favors I made sugar cookies cut out in the shape of dog bones and gave each guest a brown “doggie bag” to take home with them. The Kipper the Dog party was a lot of fun!

I made this Kipper the dog cake for my daughter’s second birthday. I got the idea from the Kipper cake on this site. Instead of tinting the icing green I sprayed it with the aerosol color. I made Kipper Tiger Pig and Arnold out of fondant. I also made the duck blanket picnic basket out of fondant.

This cake was a big hit! My daughter loved it! Thank you for the idea and this is my version.