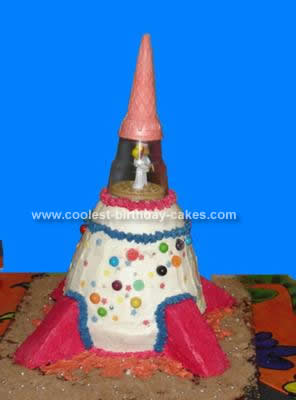 The coolest Rocked cake, should have been Barbie. I assumed that a Barbie cake would have been a suitable choice for my daughter, Tehillah’s 4th birthday.

So, with Barbie in my mind I baked 4 layers of sponge cake. With the first recipe mix, I baked the first two layers in round pans. With the second recipe mix, I used a square pan and a pudding bowl. I have cut a smaller circle from the square shape as a third layer and then placed the pudding bowl on top to create the wide Barbie dress.

I then placed the sponge cake in the freezer, as it is easier to decorate a frozen cake.

When Tehillah woke up, I proudly announced that I have baked her a Barbie cake. To my surprise she immediately replied: “But, I want a Rocket cake.” After a day of lots of careful questioning, I was sure that Barbie is off to the moon and a “Rocket” must be launched.

Luckily the shape of a Barbie dress and a rocket is so similar the conversion was easy. So we shaped the cake to look more like a Rocket. I placed 2 round “marie” cookies on top of the cake to serve as a platform for the astronaut. I secured the astronaut (a favourite toy) with a little bit of icing sugar mixed with water.

I then placed a clear, “upsidedown” plastic cup on top to serve as a “shuttle” for the astronaut. The light weight of this disposable cup made it ideal. To add to my joy, the ice-cream cone I placed on top fitted perfectly on the base of the cup. The cone gave the rocket the desired height and rounded of the “real” rocket look.

Luckily, I baked a square cake for the third layer. So I used the corners of this square to serve as the rocket’s wings.

My husband did most of the decorating, while I prepared the icing sugar. I used colourless / white margarine to get the white icing sugar to stay white. We made the wings pink and added pink patterns for contrast and to show that this rocket actually belongs to a girl.

For further decoration, we used some Astros, jelly-tots and other small sweets to create an “asteroid belt” around the rocket.

Now we proved that a little girl can also have the coolest rocket cake.