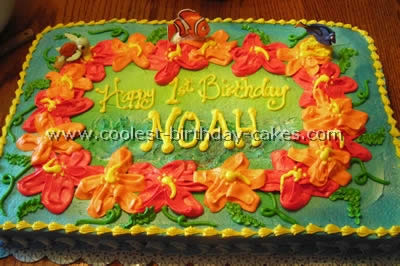 Added the Finding Nemo characters because it was a first birthday luau party! I made a little 6” round for an individual cake for the birthday boy. I made it blue too. Then added a palm tree and writing and a border for him to enjoy!

This is my tikki hut cake that I made for a Cub Scout luau party. The cake is 9 X 13 that I frosted with buttercream frosting. The sides of the cake are made with the 233 grass tip using tan icing. I made the drop flowers with tip 2D twisting the icing bag as I piped them to make them look swirled. I made them on a cookie sheet lined with wax paper and put them in the freezer for about five minutes. I just lifted the flowers off and placed them on the cake after I piped the grass skirt sides (make extra to allow for breakage).

The beach is just finely crushed vanilla wafers. Put the “sand” on before you add the flowers. The hut was made using the Wilton mini Wonder mold pan and frosted with tip 233 in tan frosting. The flowers on the hut are just flower sprinkles that I bought and the door is just a little bit of chocolate frosting. I used a fruit rollup for the beach blanket and purchased the umbrella, pail and shovel.

I got this idea for a Luau party from this website and it was a real hit! I used four basic yellow cake mixes for the base- used an extra large wedding cake pan and baked it according to the times on the pans directions. I used a small topper pan for the island with one yellow cake baked accordingly. The frosting was butter cream which I tinted with frosting tint (next time I will use whipped cream frosting!)

The island is made with chocolate frosting and then covered with toffee bits. The shells are made with molded white chocolate and fondant and were brushed with a gold edible sparkle. The Hula girls (my daughter Violet and her friend Bella) and palm trees were made out of fondant which I made the day before and kept in the fridge overnight. We also had some extra plastic sea creatures left over from the goody bags so we put them on the cake! The only thing missing was the tiki poles which were made from the large candy bar sized tootsie rolls which I couldn’t find (now I see them everywhere!) this was my first attempt at a birthday cake and if thought it came out pretty good.

Cake by Melissa A., Hattiesburg

Well every year I try to be totally different with my cakes. I originally attempted to get a bakery to make my daughter’s luau party cake but she wanted to charge me for icing. I used the basic Betty Crocker mix, followed instructions on back. My next step was the icing. I made a basic confectioner sugar icing: 2 tsp. vanilla, 1 cup shortening, blend for 30 sec. then add 2 cups sugar, 2 tbs. milk. Blend with a mixer then repeat, add 2 more cups sugar and 2 tbs. milk, blend and now you’re icing should be thick.

Now the fun part after you have iced your cake its time for decor. I went to our local dollar tree bought a luau and found two flip flop candles and some other cute candles. Added the flowers from the lei and the candles, used a can of icing with the tops for drawing and added my birthday greeting.

For this luau party cake we used an 11″ x 13″ cake pan with three boxes of cake mix. For frosting we used 3 cans of white store frosting (regular inexpensive) and did not make our own. After baking the cake and letting it cool we spread white frosting over 2/3 of the cake. We tinted one can of frosting light blue to make the water and spread it on the remaining 1/3 of the cake.

To make the grass we used green food coloring – we colored shredded coconut and sprinkled it on the land part of the luau party cake. For the beach we sprinkled crushed graham crackers with a flour sifter. Palm trees were drink stirrers. The final touches were adding the dolls and candles. Simple but a hit!

This luau party birthday cake was a hit! We had a double birthday party for my son and daughter. The cake is made from 2 boxes of yellow cake mix baked in a large rectangle pan. After baking and cooling the cake, we partially chilled some blue Jell-O (until it was the consistency of egg whites).

We cut out a section about 3/4″ deep, poured in the Jell-O, and chilled the cake to allow the Jell-O to set (this became the water). Then, we taped together wooden skewers to form a fence and added crushed Vanilla Wafers as sand for the beach. We added Luau kid figurines and frosted it to match the beach and water. Our luau party cake was so cute, we didn’t want to cut it!

My daughter wanted a luau party them. I found some great ideas from this site. She loved the hula girl cakes, but wanted water and palm trees too. I decided to do the waterfall, and incorporate some hula girls into it. I used three different size pans, and layered them off center.

It was very easy, but definitely got rave reviews. Next week, is my other daughters birthday and we are doing a Bow-Wow luau party, because she loves dogs. I am doing the same cake, but using plastic dogs and will pipe hula skirts on them instead.

I first started by baking a 12 by 18 1/2 sheet cake using 3 cake mixes. I then iced it using buttercream; I used a serrated knife and added waves in the icing. I then used an airbrush and made a background resembling sky, sun, and sand.

The tree, girl, and aloha, were made out of white chocolate that I colored and drew on wax paper and after it hardened I placed them on the luau party cake. I colored the buttercream icing tan to resemble natural grass and used the grass tip to make a skirt around the sides of the cake.

I used a chocolate mold for the flowers, using colored white chocolate and a seashell mold with fondant; after the fondant hardened I dusted them with luster dust to give them a pearl sheen. The great thing about this luau party cake was that everything was edible.

For my daughter’s 10th birthday, she wanted to have a Luau party. For the Luau party cake, I found a picture of a cake on the Internet and took it from there. My daughter, Heather, requested chocolate, so we started with a basic box cake mix, which I made in a 9 X 13 pan.

When it was cool, I carefully removed the cake and put it on a cutting board. Our idea was to have an ocean, a beach, and a “grassy” area on the cake. So, we frosted the bottom and top thirds of the cake in white and the middle section in cream.

Using food color spray (you can buy this at most grocery stores), we made the bottom third blue for the ocean, and the top third green for grass. You could also add coconut to the grass section and spray it green if you’d like, but we opted not to because most of the kids “don’t like coconut.” For the “sand on the beach,” we sprinkled brown sugar over the cream-colored frosting section.

We shopped at our local “party store” and found a little Hawaiian boy and girl and some plastic palm trees, which we placed on the beach. We also put edible sugar flowers on the beach and the grass. In the ocean, we added gummy fish and octopuses. And of course, ten candles. This Luau party cake was a hit with all the kids and delicious to boot!

My cousin Mary wanted a luau party for her 6th birthday. She had a kids’ party early in the day and a family party later. The sheet cake was eaten later with the family.

The luau party sheet cake has green icing for grass, a mix of granulated sugar and hot chocolate mix for sand, and blue spray for water. I just put the silk flower leis around for extra decorations.

The other picture is a similar luau party cake, but I just added the mermaid using the doll from the hula girls and a leaf tip for scales. I also made gummies and chocolates using a seashell candy mold for added decoration on each cake.

This luau cake was made using 10″ and 6″ marble cakes. They were torted and filled with chocolate butter cream. The 10″ cake was covered in blue butter cream waves, and the 6″ cake iced in chocolate and covered with a mixture of graham cracker crumbs and ground pecans.

The tiki hut was toothpicks glued onto a clean plastic butter container. The tiki torches were toothpicks with a bit of chocolate rolled in the crumb mixture with tiny orange butter cream flames; and the tiki god was a tootsie roll shaped and skewered on a toothpick. The flowers were made of royal icing and the shells were white chocolate brushed with pearl dusts. Palm trees were all plastic!

Cake by Laura A., Southampton, NJ

Read Laura’s “Party-Tale”: The story behind the cake…