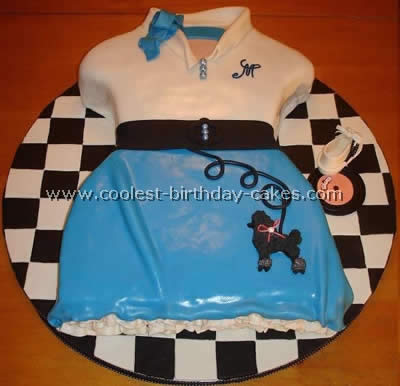 I love making cakes and this was something special. I made this cake using a size 12x18x2 cake pan made by Wilton. I made four layers of chocolate cake and filled with chocolate buttercream. Once the cakes were baked and filled I carved two layers in the shape of a skirt and two layers in the shape of blouse. I then iced the cakes and covered them in fondant. Once they were covered I simply placed the blouse cake over the skirt and added the fondant belt to cover the seam. I covered the cake board with black and white checked fondant and hot glued a ribbon around the board’s edge.

The Saddle Shoe and the record were both made from gum paste. The blouse, collar, buttons, belt and emblem were made from fondant as well. The poodle was made by printing out an image of a poodle tracing it onto parchment paper and tracing over a piece of fondant and cutting out. I then made the poodles hair by using royal icing colored black and dusted the legs with pearl dust. The bow on the poodle is also fondant. 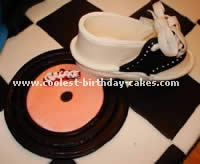 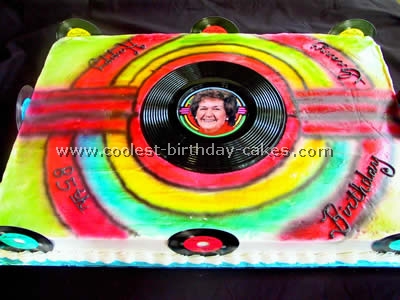 I was thinking of making cakes for a fifties birthday when I got this idea for a Rock and Roll Birthday. The Records came from a Party Store. I added the picture air brush the cake and place the records around it. 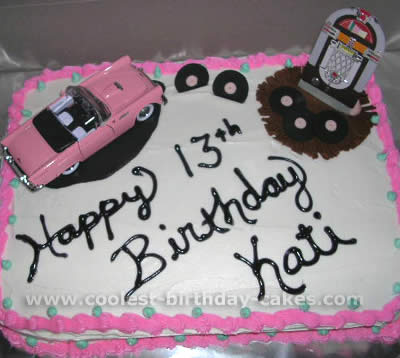 For my friend’s daughter’s 13th Birthday, they decided to have a 1950’s theme. I made a 9″X13″ cake and frosted it with white Wilton’s icing. I piped it with icing colored with Wilton’s pink and aqua food coloring, and used black piping icing for the words.

For the other decorations I purchased a figurine of a ’55 T-bird car and a Jukebox (which was actually a scrapbook sticker) and placed in each corner of the cake on top of fondant icing. I used fondant icing to cut out vinyl records, which I place around the jukebox. The cake was a hit at the party!

Thanks for all the great ideas on this site for making cakes!

Cake by Tracy B., Scottsdales 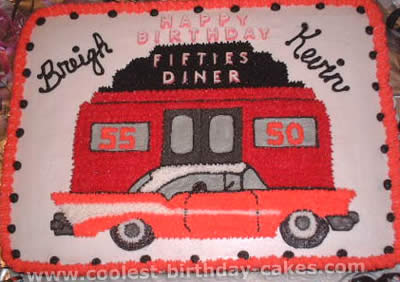 I made this cake for my mom and her friend who were sharing their birthdays. This was one of my first cakes, believe it or not! I looked for a picture of the car on the internet. I enlarged it then printed it out, then traced it onto tracing paper. I outlined the design with clear decorating gel and pressed it onto the cake. (I learned this in the Wilton cake decorating class) From there I just filled it in with stars and/or piping.