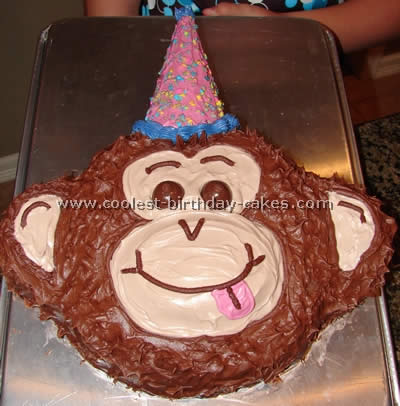 My daughter loves monkeys and for her 11th birthday we chose this monkey cake idea. We used the Wilton Animal Crackers pan. This pan looks like a bear. We cut the ears off and moved them lower on the side of the face. The rest was pretty simple.

We drew an outline for the monkey’s face and ears then proceeded to fill in all the chocolate icing. We didn’t leave it smooth because we wanted it to look like a furry monkey. After allowing that to dry for a few hours we filled in the lighter colors. The eyeballs were extra large malted milk balls from our store. We also put pink icing, blue icing and butterfly sprinkles on a large waffle cone for a party hat to add some character.

The cake was a great hit with her friends and was probably one of the easiest monkey cakes I have ever decorated.

Cake by Beans A., Vancouver, BC

I just used store bought cake mix and icing cupcakes for ears and a Pyrex bowl for cooking the cake. I added ripe bananas and semi-sweet mini chocolate chips to the mix and yellow dye to the plain white icing. My husband added the final touch of a licorice mono-brow and we were done. It was delicious! My one year old loved it!

Thanks to this site for wonderful ideas on monkey cakes.

It is covered in chocolate buttercream icing. The facial features and banana were made from royal icing. I had someone who wanted me to make a full Monkey cake. I looked online for monkey cakes and only found monkey faces, so I came up with my own monkey with body.

For my son’s first birthday cake I wanted to do something special so started searching the net and found this site!! I loved the idea of monkey cakes for my “little monkey” so printed out the picture of the cake I wanted and got baking. My finished cake was nothing like the picture I printed off but I was stoked with the finished product.

I started off by making a triple batch of banana cake and made a 23cm round cake, a 20cm round cake and six large Texan Muffins. I only needed two of the Texan muffins for the ears but there was heaps of mixture! When the cakes were cold I sliced the tops off both the cakes to make them flat and then stuck them together with chocolate butter icing and jam. I then used two of the Texan muffins, cut the tops off them to make them flat and cut them to fit round the cake then stuck them to the cake with the chocolate butter icing and jam to make the ears.

I then smothered the cake in the pale brown icing then added the chocolate icing. I used a licorice strip for the face details and Smarties for my son’s name. I even made the cake board a piece of stiff cardboard covered in red wrapping paper. I stuck some green leaves on it which I cut from green card then covered it in cover seal. Reading it back now it sounds very complicated to make monkey cakes, but it was not, it was a lot of fun and everyone at the party loved it!