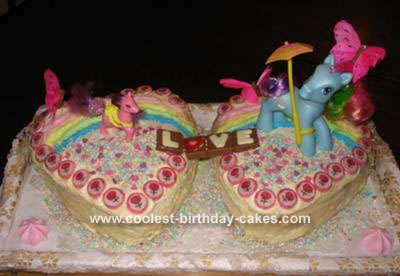 I made this cake for my daughter, Viena, for her 5th birthday. She asked me to make a My Little Pony cake, so I decided to give a toy pony to her as a present and to use it as a decoration on the cake.

I found this lovely pony Rainbow Dust. I already had a heart pattern cake pan at home and I thought it was perfect for Viena´s birthday cake. But I wasn´t sure if it was big enough.

After thinking a while, I got a great idea: why not to make two cakes like islands and to put a slab of chocolate as a bridge between the cakes to unite them! But what to put on the other cake if the Rainbow Dust would be standing on the other one?

I had bought some paper butterflies and different kinds of candy too, but I thought it wasn’t quite enough. Then I found a little toy foal in a cupboard of my children. That was it: the Rainbow Dust would be a dam! She goes over “the Bridge of Love” and shows the way for her little foal…

I decided to bake four cakes to put two cakes on top of the other two cakes. I resorted to a recipe by Deanna F. Cook in her book FamilyFun Birthday Cakes (it´s a little bit touched up version of the usual sponge cake). I also made the filling and icing according to her recipe of butter cream. It´s delicious! The “rainbows” on the cakes are made of rainbow colored candy powder.

I was quite content with my result. Still, it was so nice to hear Viena and her big brother say next morning: “Mummy, we have never seen a cake like that!”.

If you like my cake too and would like to make someone happy by trying to bake a similar one, I would be very pleased to hear about that :) Good luck with your baking and have a nice party too!