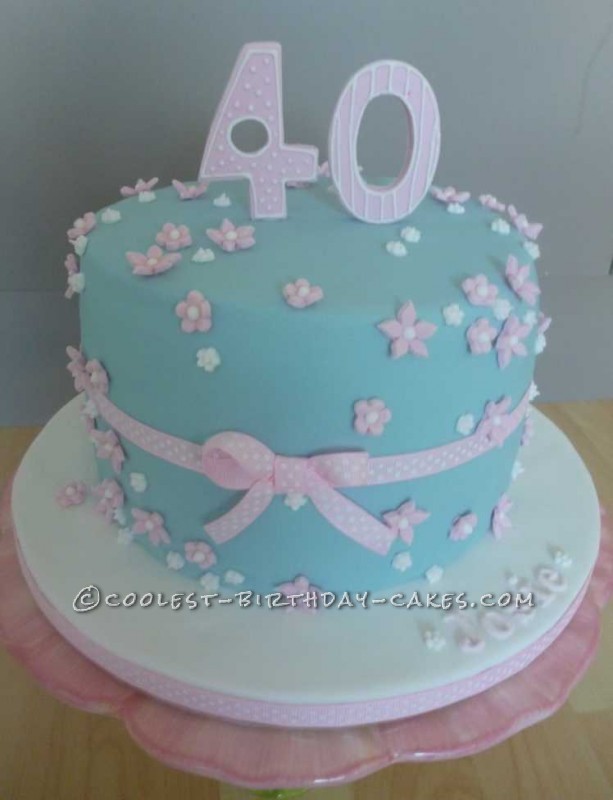 I made this last month for my best friend’s 40th birthday. This was inspired by The Sugarpaste Fairy (what amazing cakes) and was originally with a bird on top for a baby shower.

My friend is gluten free, so I made an orange and almond cake (x2), the sort where you throw in all the oranges after boiling them for an hr and blend them. So easy. Bit of a disaster with them sinking (I’m not used to gluten free) in the middle. They were so moist I had to dry them in front of the air-con all night! No harm done though, I filled in the hollows with cream cheese icing and, no one even knew!

I made the flowers in advance with a cutter and poked the centres just slightly to indent them for later piping in royal icing centres. It took ages! I left them to dry for a few days before piping in the centres in.

I iced the cake the same way I have all my others (see my other cakes for tips). To make the flowers stick on, I used royal icing which sets hard and sticks pretty well before it sets. The ’40’ was done in advance, out of fondant and left to dry with toothpicks at the bases, to stick in to the cake later. The ribbon was held on with a little royal icing and the bow was sewn, to get a perfect finish and was pinned on last of all (removed before eating)! I covered the board with white fondant to give it a clean look and in advance, I’d made her name in royal icing and left it to dry. To do this, you jusy print out the name in a font you like, stick it underneath baking paper (that you can see through) and pipe the royal icing over the top, allowing to set before carefully removing it. You just use royal icing to glue them on. The ’40’ has royal icing features on it, there are lots of Youtube tutorials on how to do this.

My friend and her guests were amazed by it when the waiters brought it out after her dinner. I’m sure it has nothing on the original creator’s cake, but she didn’t seem to notice any flaws.