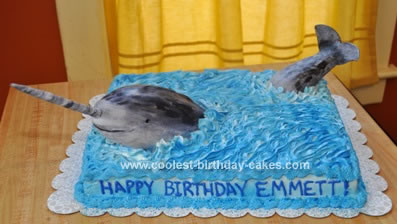 My son, who is obsessed with animals, requested a homemade narwhal cake for his 13th birthday. I looked up other narwhal cakes online, but some were really bad. I got this idea from another cake on this website, I think it was a killer whale cake.

It took me four days to make this cake. It just took an hour or two a day to prep for the final day that I assembled and frosted it.

The first day I made the head and part of the tail form (the tail without the fins) using Rice Crispies treats. I actually made two heads, in case I messed up on one. I put them on wax paper and put them in the refrigerator.

The second day I made a creamy chocolate frosting and covered the Rice Crispies pieces until they were smooth. Then I tinted the fondant a light gray, rolled it out, and covered the narwhal parts. The tail fins were a bit tricky because the fondant was soft and the fins wouldn’t hold the shape I wanted them to have. I ended up propping them up with some wadded paper towels that I’d covered with wax paper.

For the narwhal’s tusk I used a bamboo skewer and twisted fondant icing around it. I made three tusks, just in case I broke one. I let them all sit out overnight to dry. I had never used fondant icing before, it wasn’t as hard as I thought it would be.

The third day I made the 11×15 cake. I did not use a regular boxed cake mix, because I needed a denser cake to support the narwhal parts. I used a recipe I found online and have used for my other cakes…it’s FABULOUS (http://www.recipezaar.com/recipe/White-Almond-Sour-Cream-Wedding-Cake-69630).

I used the chocolate version. It made the 11×15 cake and I had enough extra batter to fill an 8″ round pan (which we had for dessert!). I also used gel food coloring in black and white to paint the narwhal pieces. I used soft nylon paintbrushes and lots of water to blend everything.

On the fourth day I made the buttercream icing (about 10 cups – I got the recipe out of a can of Wilton meringue powder) and thin-iced the cake. I used dowels to support the narwhal parts in the cake. I mixed some blue gel coloring into the icing and just swirled it in, without totally blending it in (for better effects on the waves).

I used a Wilton 1M decorating tip to make the waves. Then I made a solid blue icing and used a Wilton 32 tip for the borders and edging around the cake. I also used some Wilton Color Mist food color spray to add some depth on the sides and on the waves. I wrote ‘Happy Birthday Emmett!’ on the side of the homemade narwhal cake and was done!