Check out this splashy and cool collection of awesome swimming pool cake ideas. Discover the decorating tips to take your homemade cakes to the next level. You’ll also find loads of homemade cake ideas and DIY birthday cake inspiration. 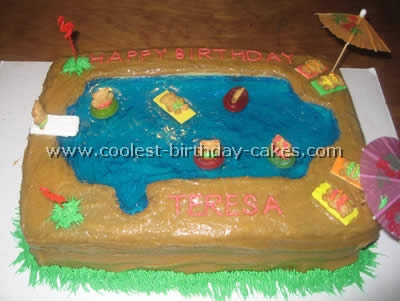 This swimming pool cake creation came from ideas on your site. I created this for a family member who is a swimming pool salesperson. I started with two store-bought yellow cake mixes. To frost it, I used peanut butter icing. I baked both mixes according to recipe instructions in 9×13 pans. Then I cut out the center for the pool using an actual spec of her personal swimming pool. I lined the pool in plastic wrap to keep the blue jello from getting mixed into the cake. Then I mixed the jello and put it in the plastic and allowed it to set for about an hour in the refrigerator.

I decorated teddy grahams cookies with icing and put gummy lifesavers candies around them for floats. I stuck these in the jello after it had set. Then, I iced the entire cake with peanut butter icing and used white icing dyed green for the grass. I used Wilton’s grass tip. I found some flamingo party picks and umbrellas at a party store. Also, I used brightly colored icing on sticks of gum for the towels and float. The diving board is also a stick of gum. 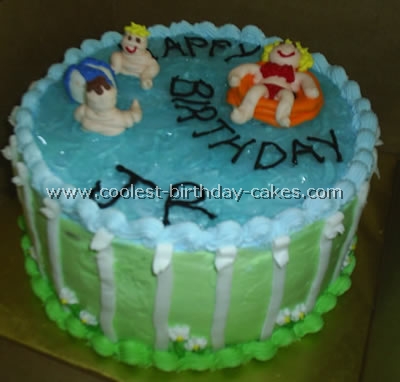 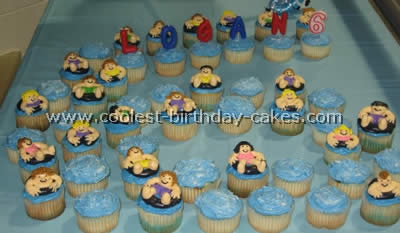 For my son’s sixth birthday swimming pool party I made these cupcakes. I got the original idea from a Wilton cupcake magazine for a swimming pool cake, I just changed it to cupcakes. I used boxed white cake mix (BC super moist butter white recipe is delicious) and colored half the batter light blue. Then, I put the blue batter at the bottom of each cupcake liner and white batter on the top of that (half blue, half white). This made the cupcakes look like they had waves or water at the bottom when the cupcake paper was removed.

I used the basic Wilton buttercream icing recipe and colored it as necessary. First I frosted each cupcake with light blue frosting. Over that I piped a black life saver on each cupcake. On each life saver I piped a boy or girl reclining/floating in the lifesaver or hanging onto/floating in the lifesaver. Make sure the frosting consistency is fairly stiff for the people. I piped different hair and different swimming suits with different colors on each one. 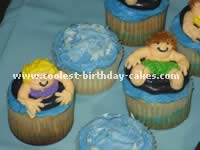 I made one of these for each child but I was not gender specific. There were 24 kids so I made 24 “people” cupcakes. For the adult cupcakes (for the parents that were also at the party) I made “water” cupcakes by using light blue frosting with a small amount of white. I displayed the “people” cupcakes surrounded by “water” cupcakes and set them up in the shape of a number six. Then, I lined up enough “water” cupcakes to put the candle letters of my son’s name and the number six. These cupcakes were very tasty and a huge hit as the kids lines up and looked and looked and looked at them. The kids lined up and one at a time they picked which cupcake they wanted. My son had requested a cupcake boy with a Mohawk which I made especially for him on his birthday. 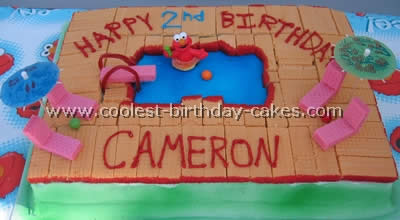 I bought a half of sheet cake from Costco to cut time in making this swimming pool cake. I used spray blue for water and spray green for grass. Then, I used sugar wafers as concrete around the pool. I dipped the edge of the pool and boarder of the cake in candy crystals. For decorations I used candies colored sugar wafers, drink umbrella’s etc. I saw the idea on a much smaller scale but incorporated Elmo as well.

I found this swimming pool cake not to be very complicated. The wafers cut easily. I sprayed the green and blue first before getting started. If you mess the cake up along the way then just spray over that area. It was a piece of cake! 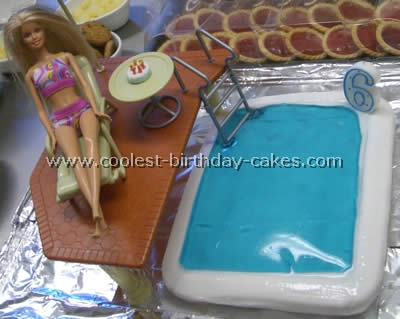 I actually planned this swimming pool cake before discovering this marvelous site and I can’t begin to tell you how many nights sleep I lost trying to figure out how to make the gelatin stay on the cake. Also for some reason the English equivalent of your Jell-o seem to react with the fondant that I used for the pool making it melt. I had made a trial mini cake to test the idea that I had and it seemed to work but for some reasons when I used it on the real cake it all became very slippery!

Never mind the children had had a pool party and they loved this cake. I fooled them by telling them that the real cake was the one on Barbie’s table (just some fondant I shaped like a miniature cake and candles and where I had written happy birthday) and that they had to share it between them (all 27 of them!). 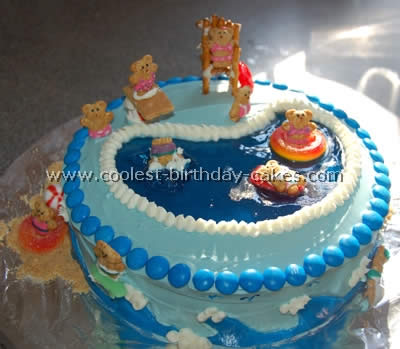 This swimming pool cake was fun to make. I used 2 9 inch pans placed on top of each other. The top layer I cut a kidney shaped 1/2 inch deep pool. I filled it with partially thickened jelly. Then, I frosted the cake blue.

I used blue M&Ms for the border and blue airheads for the waves. I crushed graham crackers for the sand and peach candy rings mint balls. Teddy Grahams I decorated with little swimsuits. I also made a surf board with airhead candy.

This swimming pool cake was pretty simple. Just a sheet cake frosted blue. I made it a little rough to look like water. Made frosting ropes and buoys down the cake for lanes and added some little swimmers racing. I made the starting blocks out of wafer cookies and toothpicks to hold them together. I placed one starting block on the end of each lane. Also, I made some pennants cheering on the swimmer on the sidelines.