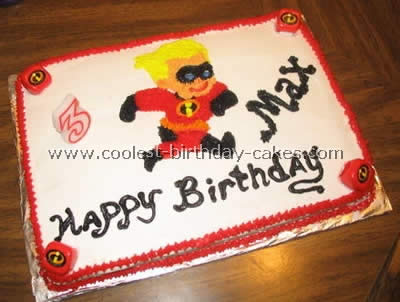 A son of a long lost friend was having his birthday so I volunteered to make the cake. To get the image on the cake I went to a party store and got The Incredibles paper plates and traced Dash’s image from the plate onto parchment paper.

Using gel I traced the image on the parchment paper and applied it to the cake. I used a combo of a star tip and a normal small round tip to make him. The corners are party favor rings I got at the party store. He really loves The Incredibles so it was worth the many hours I spent making it.

Cake by Rachel A., Malaga, Spain 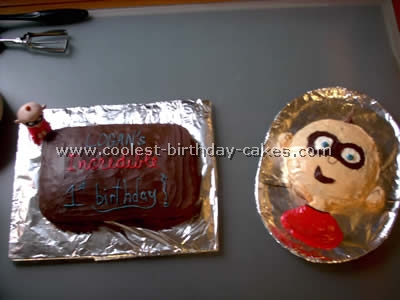 I attached a photo of the final cake of Jack-Jack from The Incredibles but also the picture from the internet where we got the idea plus a picture of our “practice” cake. We practiced the night before with a round cake pan under aluminum foil. We needed to practice not only the design but also the colors for the icing (because we had to dye the icing to match his skin tone).

The practice Jack-Jack looked a little sick but in the end we were glad we took the time because the real thing turned out perfect! We wanted to make a Jack-Jack cake for our son Logan because so many people said that he looked like Jack-Jack from The Incredibles. So I searched online to find a simple sketch of Jack-Jack that we could use for a cake. I also made a plain cake with the words “Logan’s Incredible 1st Birthday” with a Jack-Jack figurine (from a McDonalds Happy Meal) to tie it all together. 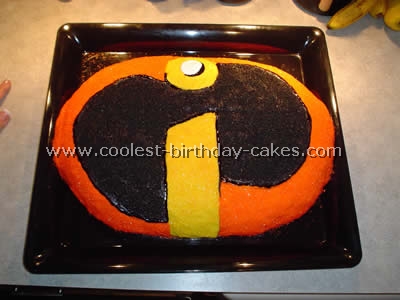 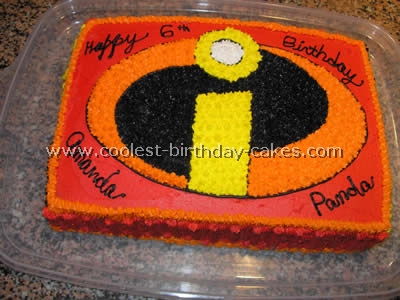 This was a fun and fairly easy cake to make. I used a cake mix to bake a rectangular cake. I frosted the cake red and let the frosting harden.

Once the outline was on the cake I used black piping to make it more defined. Using a star tip for the frosting I just filled in stars in the various logo colors to complete the design. I added some frosting stars and shells to the side just to dress it up a bit but you can add anything you like. 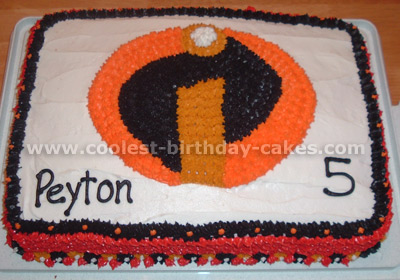 I baked a 9×13 sheet cake. I started by icing the top of the cake white. For the logo on the top I started with the “i” in the center of the cake. I outlined with #3 tip and using gold/yellow icing. I filled it in with #18 star tip and the same color icing.

Next, I used a toothpick and freehand drew the half circles from the bottom and top of the ‘i’ (to make sure they were even on both sides). I took the #3 tip and outlined what I drew with orange icing. Then I filled in with #18 tip using the same color icing.

Lastly, I filled the inside of logo with black icing using tip #18 and put the white in the middle of the dot of the letter ‘i’. Around the top edge of The Incredibles cake I placed tip #21 black stars. Every third star I placed an orange dot – using tip #4.

At the bottom of the s cake I alternated black, gold and red stars. On the black and orange stars, I placed a white dot – using tip #4. On the sides of the cake I filled in with tip #18, red icing. 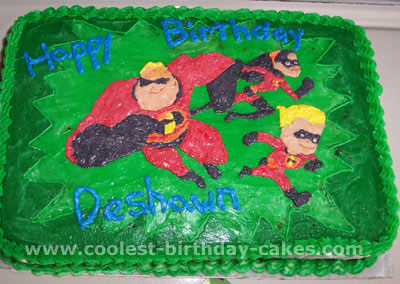 A friend wanted an Incredibles cake for her son and I volunteered to make one. I took the Incredibles invite, scanned it in, blew the picture up and printed it in black and white.

I then took a large needle and poked holes in the outlines. I frosted the s cake with my background colour and let it crust over. I then put the paper with the holes on top; I took cocoa powder and gently rubbed it into the holes.

When I lifted it up, there was the Incredibles design. I then just had to outline and fill in with the the theme colours.