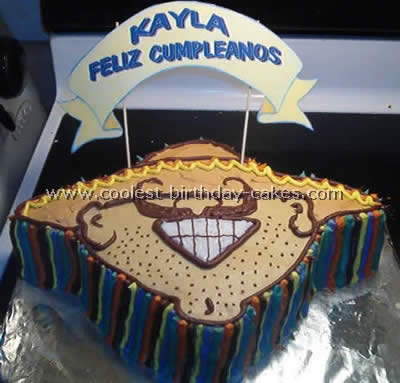 This is a theme cake from a fiesta that I made for my niece’s birthday. I first baked two 9 x 13 cakes and put them in the freezer for one hour. I found a coloring page with the fiesta man on it and enlarged it on my computer so that it would cover most of my 9 x 13 cake. Then take the cakes out of the freezer, frost the top of one and stack them. Cut out the face from the coloring sheet, place it on the cake and carve it out of the cake-going through both cake layers.

I frosted the entire cake with a light tan color (for skin color). I darkened the tan a couple of shades and used that for the sombrero. I drew on the mouth and iced it in with white. I outlined everything with store bought chocolate icing and drew on the mustache, ears, and nose and put the lines in for the teeth and dots for whiskers on the face. I used orange and yellow frosting and piped zigzags on the sombrero.

I piped lines up and down the sides of the cake with yellow orange purple green brown and blue-alternating colors all around the cake. Try to make the colors very bright when you make the icing. The banner was just printed on my computer using cardstock instead of regular paper and two skewers were taped to the back.

I had this cake idea for my sister’s 30th surprise birthday fiesta. She loves Mexican food so I made a Mexican cake to complete the theme.

I made two chocolate mixes according to directions and added cinnamon (as Mexican sweets sometimes have cinnamon). I used the Wilton large round cake pan for the base and a medium Pyrex mixing bowl for the top.

Once the cakes cooled I placed the dome shaped cake on top. I used a small paring knife to cut “dents” in the sides of the hat to make it look more authentic and also cut a “ledge” in the bottom to resemble a brim. The “buttons” and peppers are made of fondant.

This fiesta cake was for a retirement party. I wanted to make it as fun as the gathering, so I created the sombrero by using a mini mold pan as the hat and trimmed out two indentations at the top, like a real hat. For the brim I cut an 8″ circle from fondant and sat it overnight in a cylindrical bowl to shape the curve of the brim.

Once I put them together I covered both with tip 16 stars in a sombrero design. I made the cactus with a large shell tip and added tip 2 pull out needles. Instead of making the chili peppers from fondant, I found those which were actually candles and tied them together with “vine and leaves” on top of a bead bottom border.